Problem-solving at a persolal level

HYDERABAD: If you are not part of the solution, you are the problem. About 14 students from Page Junior College in the city took that line seriously and have come up with solutions, practical and feasible, as part of their Innovation Lab event on Sunday at the MCRHRD Institute, Jubilee Hills.

The students came together to be part of a pilot programme to take up social challenges and fi nd solutions. The children split into teams and were asked to come up with solutions for problems plaguing our society. They follow a set procedure of empathising, defi ne the problem, researching and then ideate and fi nd out solutions. The chief guest at the event was Jayesh Ranjan, IT secretary, Govt. of Telangana, lauded their ideas. 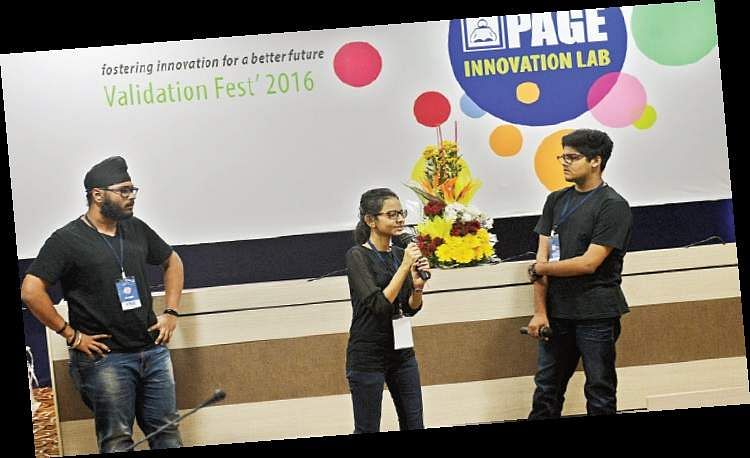 Vyomika and Manasa, who call themselves Team ICE (Interactive Classroom Experience), say their aim is to make the classroom experience holistic for teachers and students. The survey they conducted showed that most children in high school found classrooms to be boring. They wanted more interaction in class with the teachers.

The teachers on the other hand said, “The onus lies on the students to come and ask questions and initiate a conversation.” They divided the students into visual learners (those who learn by sitting and observing in class) and auditory learners (those who learned through hearing and paying attention). The teachers in general wanted a disciplined classroom and were bothered as to whether the children understood what was being said in class.

“Redesigning the classroom in such a way that there is ample space between two benches and students feel they have their own space. The teacher too can move about easily and the students feel comfortable asking questions. Having plants and colourful classrooms also helps soothe their minds. The third solution is changing how a period goes. Instead of teaching for the full hour, teachers can revise what happened in the last class for the fi rst 10 minutes. The class could also end similarly,” were the solutions given by them.

The next group Team Wonderland comprising Aaryan, Hartaj and Subook from Team Wonderland focussed on improving the working conditions of garbage collectors or rag pickers. They said, “They have no safety equipment. They wear tattered clothes and are exposed to toxic gases in the garbage. Finally, they do not get the respect they deserve.

These guys are the ones who come home and collect our garbage, they wake up at 4 am sometimes just so that the garbage in our house is cleared. In spite of all this, they are forced to live miserably. The GHMC says there are medical camps being held for them. But, that does not seem to be the case. People also need to take ownership and segregate their waste.” When asked what solutions they would provide, they say, “First, let us stop calling them rag pickers and scavengers. How about addressily ing them as Swacch Sainiks, as they are fi ghting the war of garbage for us? Give them better quality gloves, masks and shoes that last.

A new hierarchy should be created zone wise consisting of Swacch Sainiks at the base, who report to a Pramukh Swacch Sainik, who in turn reports to a Maha Swacch Sainik. These guys fi nally report to the Chief Swacch Sainik who interacts directly with the GHMC.” The dump grounds should have a canteen, washroom and maybe even a bunk bed for them to rest. Revamping the parking system for large and small vehicles and a system of rewards and challans for people who do and don’t segregate waste respectively

This team consisted of Sanjay, Harith, Rohan and Gayatri who were team Saharog. They came up with the name by joining the fi rst two letters of each of their names. Their theme was ‘Housing for All.’ They found out that slum dwellers faced abysmal conditions of life, but still fi erce pride of living in that particular location, a sense of identity and unwillingness to move is the reason they are continuing to live there. Also many are occupying government land with threat of being evicted.

The best solutions according to them were that, “Government should use old shipping containers as houses which can be customised for the slum dwellers’ needs. They would also be weather and fi reproof and easy to maintain and keep clean. These homes will be more comfortable and strong, and with permission from the Government, they can still stay on the land they are occupying in a neat way. Solar panels and wind turbines should be provided on roofs, to help them as it would be low cost. Also clean washrooms should be provided.”

This group called Futuretron had Indu, Ridhi, Satavahana, Sarayu and Aditya as its members. They were focusing on the condition of the school transportation system in Hyderabad. They say, “School bus rides are not comfortable or safe and parents are always worried about the whereabouts of their child.” “ Even the drivers do not have comfortable driving seats.” They added saying, “When someone is responsible for the safe transportation of your kids to and from school, minimum levels of comfort should be provided to them,” they add.

“Lowering the bus suspension when it reaches a bus stop to make it easier for children to board the bus, different textured fl ooring for better grip so students don’t fall and retractable tables for them to eat snacks if they want to. Bus Buddy App for kids can also be used to make the bus ride fun and interactive. Beep Beep App based on GPS will enable parents to track their child’s whereabouts,” were the solutions provided by them. They also added that, “Comfortable seats should be installed for bus drivers which can hold a bottle of water and a snack box,” they inform.