It’s time for Hyderabadis to embrace ‘Swachh Survekshan’ as the civic body is rolling out ‘WOW’.

HYDERABAD: It’s time for Hyderabadis to embrace ‘Swachh Survekshan’ as the civic body is rolling out ‘WOW’. In an attempt to clean-up the city, ‘Swachh Survekshan 2017 - Wellbeing out of Waste (WOW) Hyderabad’ was launched at Lal Bahadur Stadium on Thursday. 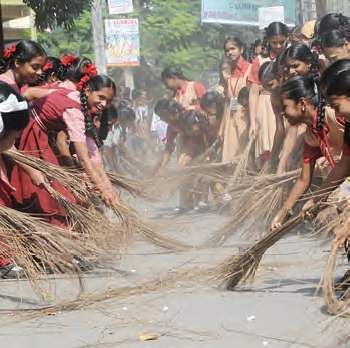 With regard to the annual survey -- ‘Swachh Survekshan’ -- in which a total of 500 towns and cities will be ranked and rewarded with awards for active implementation of the mission initiatives in a timely and innovative manner, the GHMC is conducting mass awareness campaigns through ‘Gandhian philosophy’ (to request for a drastic change constantly in the system). The idea is to encourage citizens’ participation for improving the sanitation levels of the city.

Addressing a press conference here on Thursday, mayor Bonthu Rammohan and commissioner B Janardhan Reddy said that their aim is to raise awareness among people on the importance of source segregation, their participation and contribution to help the city get a good rank in Swachh Survekshan.
1,000 dry resource collection centres in city WOW programme by ITC Limited is one such initiative to inculcate the habit of source segregation of waste into wet, dry and bio-hazardous waste among people of Hyderabad and also to introduce home composting from wet waste and usage of the same for home gardening.

As part of this programme, ITC is planning to establish 1,000 dry resource collection centres in the city and create additional income to waste collectors.
Similarly, Godrej Consumer Services concluded an agreement in the presence of KT Rama Rao for establishing about 25 dry resource centres under its CSR initiative. The mission is named as ‘Swachhagraha’ and the motive is to make the city - Clean Hyderabad.
As part of the initiative to make the city ‘Open Defecation Free’, GHMC provided for 450 public toilets. GHMC has asked oil companies to establish about 300 public toilets in their petrol bunks.

All for maximum participation
These initiatives will encourage maximum number of NGOs and other social organisations to join hands for Swachh activities and work towards making the city clean. GHMC will felicitate waste collectors, Swachh Sevak’s (preferably Swachh auto drivers collecting segregated waste separately and motivating the households on importance of segregation).