Wow! a rooftop wind turbine for your home now

Archimedes Green Energys by Gajjalla Suryaprakash, the recipient of MSME National Award from the Ministry of Micro, Small and Medium Enterprises, Govt of India in the past, has come up with India’s first rooftop wind turbine to generate green and sustainable energy. It is a “Make in India” product, declared Suryaprakadh who said the company has signed an MoU with BITS Pilani Goa for technical testing and certification. 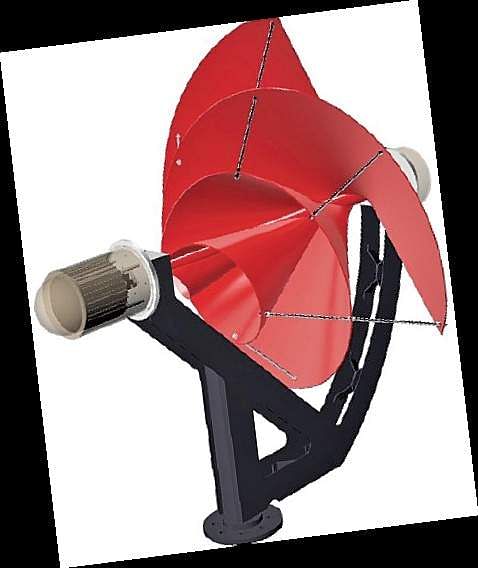 The silent rooftop wind turbines can generate half of a household’s energy needs. And that too it is renewable, clean and green energy, Suryaprakash added. The sleek  windmill yields more energy, produces little noise, is bird- friendly. The maintenance-free turbine can be fixed on top of an apartment, in fields and everywhere. It can rotate 360 degrees, added Suryaprakash.

It works in low velocity winds from 0.9 meter/second to as high as 14 meters/second. In high winds such as 22 meters/second,  it just stops to avoid damage to the turbine. The two variants – small of 36 kg and big 112 kg is easily transportable and is available in six impressive colours. The Wind Mill comes in Fibre Reinforced Plastic Blades. “The Archimedes Wind Mill” will be showcased during two-day expo on renewable energy, Renewex-2017 exhibition at HITEX in Hyderabad on April 7 and 8.

The brand named after the famous Greek mathematician and engineer, it can produce 1500kWh of energy at wind speeds of 5m/s--approximately half an average household’s energy use, Suryaprakash informed. The first installation of the product is likely to come up at city’s well known land mark, Birla Temple for which the permission processes are underway. He said that the product is the outcome of 20 years of research of  The Dutch national Marinus Mieremet.

He has perfected the technology, the new and more efficient way of generating power by a wind turbine. The Dutch have a reputation for obtaining energy by means of windmill, Suryaprakash added. Archimedes Green Energys is setting up a manufacturing plant which will serve as a global export unit in a two acre land at Medchal with a substantial investment. It will have a manufacturing capacity of one lakh units per annum, he informed.