Being a vegetarian in Dubai

Yes, the world’s  most gorgeous city has an amazing spread for its vegetarian and vegan visitors.From exotic and organic fruits to innovative cuisines, it offers it all

HYDERABAD: At every occasion, my friends grab the chance to ask me, “Tereko paneer hi chicken hai na!” When I told them that I was visiting the world’s most happening and luxurious city – Dubai, I found them rolling on the floor, laughing and asking me how I would survive in Dubai. I just facepalmed them and walked away. I left for Dubai half-heartedly because even I was not sure I would survive being a vegetarian in Dubai.  But then...

Global approach:
As I settled down with my seatbelt and my book on the Emirates EK 527, I was filled with excitement on my first trip to Dubai. I checked into Rove City Centre hotel and realised there was a supermarket on the ground floor. I felt relieved,thinking I would survive on chips and sodas, if not on paneer and baigan. The view of the skyscrapers from the hotel room ensured the Dubai feeling soaked in. We headed off to Global Village. Well, before we get into food, let me brief about the world’s only place where we find America and Russia under one roof. Wondering how? Global Village has pavilions of all the countries representing their culture, food and shopping activities. Guess what! Indian pavilion represented our country in the real sense of the term. While the other countries co-existed in silence, Indian pavilion had Prem Ratan Dhan Payo and Kajarare playing in high decibels. 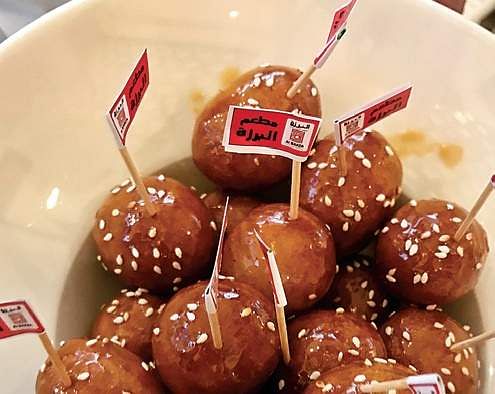 The special tea at the African pavilion awakened all my senses and I was all set for the surprises Dubai was throwing at me. After some adventure with roller coasters, I went to Thailand arena just to relish those fresh-cut exotic fruits like dragon fruit, wild pineapple and peaches. Well, they are available at every supermarket in our city, but the Thai fruits were bigger and juicier. They were organic and tastier. While walking through the sprawling Fun Park, I stumbled upon Turkish ice cream stall and the magic that they weaved with it won me over.  Nutella donuts to nutella icecreams and tarts, the hazelnut and chocolate lovers can go crazy. We stopped by the Grand Barbeque, anIndian restaurant to have our dinner along with our new Syrian friend, an employee of Global Village. The joy of making him taste the spicy panipuri and Afghani paneer with masala kulcha was thrilling beyond words. Just like in the movie Queen, he got teary-eyed when he first tasted the spicy pudina and imli pani, but later he couldn’t resist from eating more. Well, I felt good turning into the panipuri wala bhaiya temporarily. The dinner was complete at the Chinese pavilion with some steaming hot jasmine tea.

Ripe Market:
After a scrumptious breakfast at the hotel, we went to Zabeel Park and were introduced to a concept called Ripe Market. Here farmers and food creators from the world over gather and exhibit what they offer to the world. Well, I got to taste caramel and lotus-flavoured iced-tea and cow milk icecream, various hybrid varieties of olives, white honey, queen’s honey, mountain honey, Mexican pina colada, organically grown fresh fruits, vegetables and more than 90 varieties of cooking oils. In addition of all these raw food, we got to indulge in some doughnuts, cupcakes and brownies.

Beach Canteen:
We Indians are used to eating at the beach. Aren’t we? Bhajjis, peanuts, corn and what not but the experience of having organised stalls of gourmet brands from across the globe. Well, what else can a man ask for! Clean beach, plethora of food and of course some music and dance. The live cooking sessions too were attractive, but surely not for the vegetarians. Beach Canteen at the Kite Beach had everything one could die for. Waffles with fresh cream and fruits to Japanese veg sushi to Lebanese style of cheese samosa,the authentic Emirati sweet delicacy- Luqaimat. It is fried dumplings with some date syrup or caramel syrup on it. I bet, one can’t stop with one. It is as addictive as Lays or Kurkure. Some cold pressed organic drinks containing vegetables, fruits and herbs with names like ‘Better than Botox’ replaced the regular aerated drinks. I tried all their flavours. Haagen-Dazs ice cream completed the beach experience. 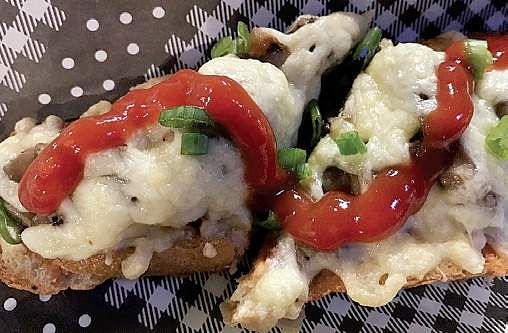 Street Night:
The pop culture in Dubai is just beyond imagination. After having the taste of global platter at the Beach Canteen, the evening began with some street style food trail. Battle of BBoys welcomed us to the Street Nights where people thronged to get some chilled out vibes and sample the hottest street food vendors. Region’s top graffiti artists too jammed in a live graffiti, adding to those vibes. Guess what was the best part of Street Night, “Kaapi.. Kaapi… Filter Kaapi…!” We Indians always manage to mark our presence and stand out. Well, coming to food, a young South Indian boy owns a food truck called Wokinakki, where he serves you the recipe of happiness. The fusion of Thai and Indian veg rice bowl made the  non-vegetarians turn green in envy. Yes! The falvours of Thai curry with exotic vegetables and a pinch of Indian masala made the dish stand out among all the other rolls and sandwiches. Moving to the Egyptian stall, I was wondering, if I would get something non-meaty and to my surprise, a dish called Kushdari, made of rice, noodles and crispy macaroni with the right amount of spices gave me an insight into the fact that there are vegetarians in every country and it is not always about meat. Just to add fun to my goal-worthy food trails, I tried some lemon-mango popsicles. Oh wait, the Poland stall offered me some charcoal lemonade and Dutch offered me some cheese sandwich. Perhaps it is a global tradition to end the meal with a dessert and at Street Night, it was at Cryspes. It was fritters with preferred flavour topping. The toppings varied from caramel, nutella to the famous Lotus biscuits of Dubai.

Comptoir 102
The third day at Dubai started off on a healthy note. Comptoir 102 on Jumeriah road offered us more than just healthy food. Winner of the ‘What’s On Award’ of the best Healthy cafe in Dubai, Comptoir 102 is one among the favourite places for healthy eating. The philosophy behind the café is to offer a more conscious and healthy lifestyle by bringing more sustainable and nutritious food. The cafe had French ambience and arty stuff around were a delight to eyes. The cafe sources ingredients from local organic farms, sugar-free and dairy-free, with raw, vegan and gluten free options menu, changes daily according to harvest, just like at home. The smoothies and juices are vitamin-packed. We were served Skinny Boast- a smoothie made of cucumber, banana and basil, Heaven on earth- a smoothie made of cinnamon, cocoa and banana. Acaio, almond butter porridge, chocolate porridge and pancakes surprise my tummy that was full of junk.

City Walk:
From a simple milk chocolate to exotic dark chocolate, the mall had chocolates from all parts of the world. If this is not called heaven, then what is! Just when I was relishing those chocolates, I was introduced to a new snack called French fries. Puzzled? Well, these were sweet potato french fries. This just goes to prove that no matter how ugly potato looks, the output of it is delicious and addictive.

Kaák:
At the Lebanese canteen, we tasted Kaák. It is a bread with sesame seeds and a filling of our choice. For the sweet tooth, it was nutella Kaák and for the chessy people, it was the herb and cheese. This authentic Lebanese dish has a history of being the most favourite street food of the middle eastern countries.
We had dinner at Rang Mahal at JW Marriott Marquis Hotel Dubai on the last night of our trip and it was exotic. Chef Atul Kochhar’s team ensured we were served unique dishes. The yam starter was simple, but most memorable. Wait a bit to know more about his venture and food.