‘Development’ which has been a keyword of Prime Minister, Narendra Modi-led government, formed a key component of the speech given by Vishwa Hindu Parishad, International Working President, Pravin Tog

HYDERABAD: ‘Development’ which has been a keyword of Prime Minister, Narendra Modi-led government, formed a key component of the speech given by Vishwa Hindu Parishad, International Working President, Pravin Togadia apart from the reiteration of their demand of a ‘grand temple’ for the Hindu god Ram at the disputed site in Ayodhya. 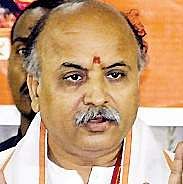 Togadia said, “Ram mandir bhi chahiye aur samriddhi bhi chahiye”, which translates into we want Ram temple and also development.  Speaking on ‘development’ at Sree Hanuman Vyayam Shala stadium in Hyderabad on the occasion of Ram Navami on Wednesday, the VHP man raised the issues of unemployment, farmer suicides and rising costs of education in the country. He also attacked the Congress which was in power for many years at the centre and indirectly questioned the promises of development of the present BJP led government.

Referring to the recent incident of the burning of chilli crop in Telangana due to low Minimum Support Price Dr Togadia asked asked why is it that the farmers are forced to burn chillies if the governments over the years have been focusing on development. He also asked as to why farmers are committing suicides if there has been development.

He said, that when he did MBBS it had costed him only `300 but now a poor man cannot afford to send his child to do MBBS due to spiraling costs of higher education. He asked as to why about 15 crore Hindu youth in the country are unemployed and around 19 crore people are homeless.