After chasing blackbucks in the Jungle Lodge Resort in Vilaspur (Karnataka), I chose to kill the next day in the nearby Bidar, a mere 18 km from the resort.

HYDERABAD:  After chasing blackbucks in the Jungle Lodge Resort in Vilaspur (Karnataka), I chose to kill the next day in the nearby Bidar, a mere 18 km from the resort. Bidar city is well known for its Bidri handicraft products, as much for its rich history. It is also considered one of the holiest places for Sikh pilgrimage (Gurdwara Nanak Jhira Saheb). I often find people travelling from Hyderabad for a day’s trip to Bidar, which is around 140 kms away – a three-hour drive.

On the way they stop for cutting chai or cool watermelon or simply munch ‘time-pass’ moong phalli (peanuts) in the air-conditioned comfort of their car. Of course, whenever something rural and fancy catches their eye, there will be a brief stop for a ‘selfie’ moment.

I did not enter Bidar city. Instead, I caught a glimpse of Karnataka’s richly textured history in the rugged 15th century Bidar Fort: surrounded by a triple-moated wall hewn out of red rock, with intricate battlements and an imposing gateway. 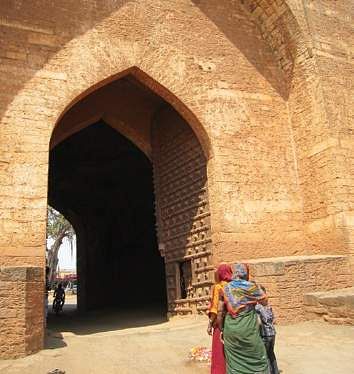 Took a walk through the ruins, which were once royal baths, kitchens, audience halls and pleasure pavilions. Experienced the Rang Mahal with its elaborately carved wooden pillars, Persian couplets engraved in tiles and exquisite mother-of-pearl inlay work. What’s more, I came back much invigorated!

Bidar Fort is considered as one of the most formidable forts of the country. It was distinctly planned and built on the brink of the Deccan Plateau by Sultan Ahmed Wali between AD 1426-1432. Engineers and architects of various countries were employed on its design and construction. The fort is surrounded by 5.5 km of defence wall consisting of 37 massive polygonal bastions and seven strong irregular rhombic shaped gates.

The fort is entered from the southeast by a zigzag passage protected by three gateways. It is said that the unique triple moat defence, resembling the medieval European forts was made by Turkish mercenaries.

Another interesting feature is the massive magazines for arms storage and tunnels for escape in emergency. Within the fort are interesting monuments like Takht Mahal, Tarkash Mahal, Rangeen Mahal, Gagan Mahal, Shahi Matbakh (royal kitchen), Diwan-i- Aam (public audience hall), Sola Khamba Mosque, Naubat Khana etc. I spent time at some of the most noteworthy monuments. 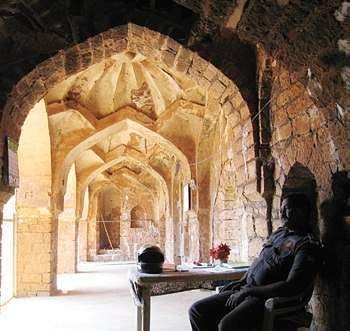 Originally it was the principal mosque, Masjid-i-Jami of Bidar. It is also called zanana masjid. In 1656 AD  when Aurangzeb, as viceroy of the Deccan from the imperial court at Delhi, conquered Bidar, he hastened to this mosque to have the khutba recited in the name of his father Shah Jehan, as proclamation of his sovereignty in the newly acquired territory. In the inscription, dated to AD 1423-24, it is mentioned that the founder of this mosque was Qubli Sultani.

The mosque is called so, as it has 16 pillars in the front. It is of vast dimensions and one of the largest mosques of India noted for its architectural style. It consists of a large prayer hall divided into a multitude of aisles by massive circular columns.

The roof is crowned by a majestic dome, raised on a high clerestory with windows of perforated screen work in different geometrical patterns. A parapet of pleasing designs above the imposing arcade adds to its beauty. It is an excellent example of the second phase of the Deccani style.

This was originally built by the Bahmani kings, but later the Barid Shahi rulers made some alterations and additions. The palace has two courts, the outer one apparently was used by the staff and the guards of the palace and the inner one was for the royal ladies. The main building of the palace lies to the south of the inner court, used by the sultan and his harem.

Rangeen Mahal, situated in the fort, near Gumbad Darwaza, is unique because of its decoration with blue coloured Persian tiles and other artwork. Woodcarving done here is not only precious but also unique. 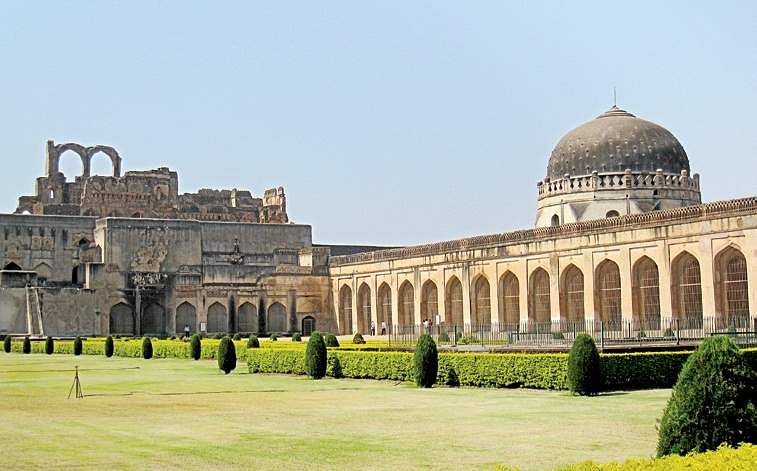 The walls of the mahal are adorned with mother-of-pearl of the finest quality inlaid in jet-black stone. Floral patterns and calligraphic text are also depicted here. Stone carving, stucco art are other attractions of this monument. It was rebuilt during Barid Shahi period. The design of this monument represents the blend of both Hindu and Muslim architecture. There are rooms in the basement of the Rangeen Mahal.

It is said to have been built for Turkish wife of the sultan. From the remains of the decorative work found in the ornamentation of the walls, it can be said that the mahal was built or extended by the Barid Shahi Sultans who had kept large harem with ladies from different nationalities. The rooms are decorated with stucco work.

Built by Ahmed Shah, this royal residence was originally decorated with coloured tiles and stone carvings part of which can be seen even today. It has two side royal pavilions with lofty arches and a spacious hall at the back of which lies the sultan's room. The building has stately dimensions and exquisite surface decoration. The coronations of several Bahmanis and Barid Shahi sultans were held there. From the royal pavilion, which is situated behind the throne palace, I had a great view of the valley and low land below.

After that leisurely wandering in the fort, I sat and watched some ladies doing a puja, right at the entrance of the fort gate. We chatted along as they broke coconuts, sprinkled haldi kumkum, lighted incense and showered flower petals. I thought the fort richly deserved the worship though they said the ritual was meant for a particular deity.

(The author is a documentary filmmaker and travel writer; she blogs at
vijayaprataptravelandbeyond.com)