Thanks to the brave act of a police constable, around 50 people were rescued after a fire broke out in a building here .

HYDERABAD: Thanks to the brave act of a police constable, around 50 people were rescued after a fire broke out in a building here .
At around 11.30 on Monday, the fire control room received a call that a fire broke out in an office situated in Osman Plaza in Mehdipatnam. The complex has 30 flats of which nine flats were let out to commercial establishments. 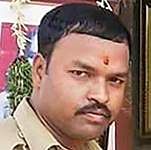 The complex watchman,  who saw thick black smoke emanating from engineering exports office in the first floor,  alerted the locals. Constable Bheem Rao, attached to Humayun Nagar police station,  was on duty nearby  when he was alerted by the people. He rushed to the building and brought out an LPG cylinder thereby averting a major disaster. He later helped around 50 people, including women, children and elderly persons, come down to the ground floor.

Ahmed Nagar corporator Ayesh Rubina, whose office was located nearby also rushed to the spot and helped Bheem Rao and others in rescuing the residents. “Fire department personnel came to the spot at 12 pm. We tried to control the fire with extinguishers, but in vain.  We first switched off the main electricity supply and then carried out rescue operation though stairs. Thankfully no loss of life has been reported,” said Ayesha.

“Apart from getting the people down on the ground floor, Bheem Rao also brought out LPG cylinders from the building to prevent an explosion,” said a resident.
police said electrical short-circuit caused the blaze.  Five computers, three inverters and furniture in the office have been completely gutted.