Not just menstruating muse, women are creators of art and literature

A panel discussion on the last day of Hyderabad Literary Festival, fittingly titled ‘Not Just Menstruating Muse’, reflected on the categorisation of women in the field of Art and literature.

HYDERABAD: Women, often, exist on the other side of art as muse while the creators are mostly men. Women artists, writers and poets on the other hand get sidelined, struggling much to come to the front.
A panel discussion on the last day of Hyderabad Literary Festival, fittingly titled ‘Not Just Menstruating Muse’, reflected on the categorisation of women in the field of Art and literature. 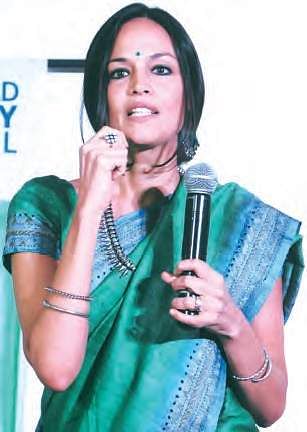 Though there was not much of fireworks during the discussion by the two poetess Arundhathi Subramaniam, Tishani Doshi and artist Katharina Kakar, the wordsmiths and the artist had to say interesting things about women in field of art and writing.
The plenary began with moderator and one of the festival directors Amita Desai asking if women writers are comfortable being categorised specifically so.

Mumbai-based poet and translator Arundhathi talked about the new ‘freedoms’ for women. She said, “I am not uncomfortable about being a woman writer as long as it is in lower case. Women are freer in some of the ways more than before and I am not in a hurry to throw that away. When a women writes something in first person singular, the world feels it is always personal. It’s not the same for men.” Her reply was received with thundering claps from the audience.

Katharina Kakar, a German artist settled in India, talked about her artworks titled ‘Crossing the Lakshman Rekha’ as to how she finds it difficult to gain confidence that men so easily gather. The audience guffawed along with her when she said, “When I work on my paintings, a lot of people ask me: How is your hobby coming along?. It’s unintentional, but insulting.”

In an interesting take on the issue, poet and dancer Tishani Doshi said she finds the word ‘poetess’ an ugly one. “But there’s something collective about women that men don’t have. After working on one art form I gathered this idea of primordial gender,” she said. It was interesting to hear about how she, through her dance forms, sees herself just as a creature and not classified and bound in gender.

And it was Arundhathi who summed it up wholly, saying, “During my research while translating Bhakti poetry, I came across male gurus or saints who had female voices - something emerges from that which has its own value and fluidity. Everyone knows of moments where one is not a man or a woman, one is just a human.”