The Sri Vignana Vardhini (SVV) High School located in Saidabad here finds itself in a controversy after a teacher allegedly forced Muslim girl students to remove their burqas before writing SSC exams.

HYDERABAD: The Sri Vignana Vardhini (SVV) High School located in Saidabad here finds itself in a controversy after a teacher allegedly forced Muslim girl students to remove their burqas before writing SSC exams. Tension prevailed outside the school as irate parents of the students staged a protest near the  school on Saturday.
“We did not tell anyone to remove burqas. Several students from different religious backgrounds have appeared for examinations in the past 25 years in our school,” N Veerender Babu, correspondent of the school, told Express. 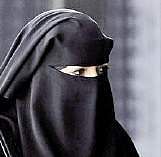 He said “Invigilators for the SSC exam come from different schools. They only check the students’  face for identification. They also check their sleeves and shoulders to ensure no malpractices take place. Girls were given the option of removing burqas  if they like.’’
“On Friday students were made to remove their burqas before the exams. Today again when the school asked them to remove their burqas, their parents were infuriated,” said Amjed Ullah Khan, an MBT leader,  who lodged a complaint with Saidabad police against the school management for hurting religious sentiments.

He also enclosed along with his complaint a copy of orders from District Education Officer (DEO), Hyderabad vide: RC.No.01/G-II/DEO/Hyd Dated: 1st March 2017 that no Muslim girl student should be forced to remove burqa during the exams at any centre.
However, the invigilator in question, has reportedly tendered an apology to the parents. She reportedly told them that no one was forced to remove their burqas.

The students, however, painted a different picture. “We were told that we cannot  write the exam till we removed our burqas. Today, we decided that we will not tolerate the  whims of school and decided to protest. For frisking purpose, we don’t mind removing the burqa but we cannot write the exam without it,’’ Saleha Khan, a student, said.

The Hyderabad district education officer (DEO), G Ramesh, however, dismissed the matter. “As per the rule students can write the exams with burqas. At this centre students were asked to remove their burqas only for inspection purpose. After that that were allowed to write their exams,” he said.