The karam dosas from kadapa

Like in any other city in South India, dosa is a much sought-after snack in Hyderabad. Almost every street corner has a kiosk preparing fresh dosas, where innovations take place all the time.

Like in any other city in South India, dosa is a much sought-after snack in Hyderabad. Almost every street corner has a kiosk preparing fresh dosas, where innovations take place all the time. Thus you have paneer dosa, egg dosa, rainbow dosa and even pizza dosa.  However the authentic variants of the delicacy still command respect, and one of these is the karam dosa of Kadapa and neighbouring districts in Rayalaseema.

The karam dosas from Kadapa are known for the flavourful chutneys which are spread out inside the layer to give them a special edge. The most popular of these is Erra Karam, which means red spicy chutney. The main ingredients of this chutney are abundant dried red chillies with onions, garlic pods, and mustard seeds added to it. The chutney has some similarity to its counterpart prepared for the popular Mysore dosa from the neighbouring state of Karnataka.

The Erra Karam dosa is first prepared on the tawa, and then this chutney is smeared uniformly on the dosa. Pappu podi or roasted besan powder is put on top to neutralize the extreme heat from the chillies. A yellow coloured chutney called Bombay chutney is optionally added to enhance the taste even further. This chutney, which is also a preferred side dish with other snacks, has besan, onions, curry leaves and a little bit of turmeric.

The other popular dosa from the region is known as Pachi Karam Dosa, where a green chilli based chutney is used. This chutney has onions and sometimes coriander added to it. This may again be topped with pappu kodi for neutralising the excessive spiciness. The Kadapa versions also have something called Mixed Karam Dosa where both the red and green pastes are applied. 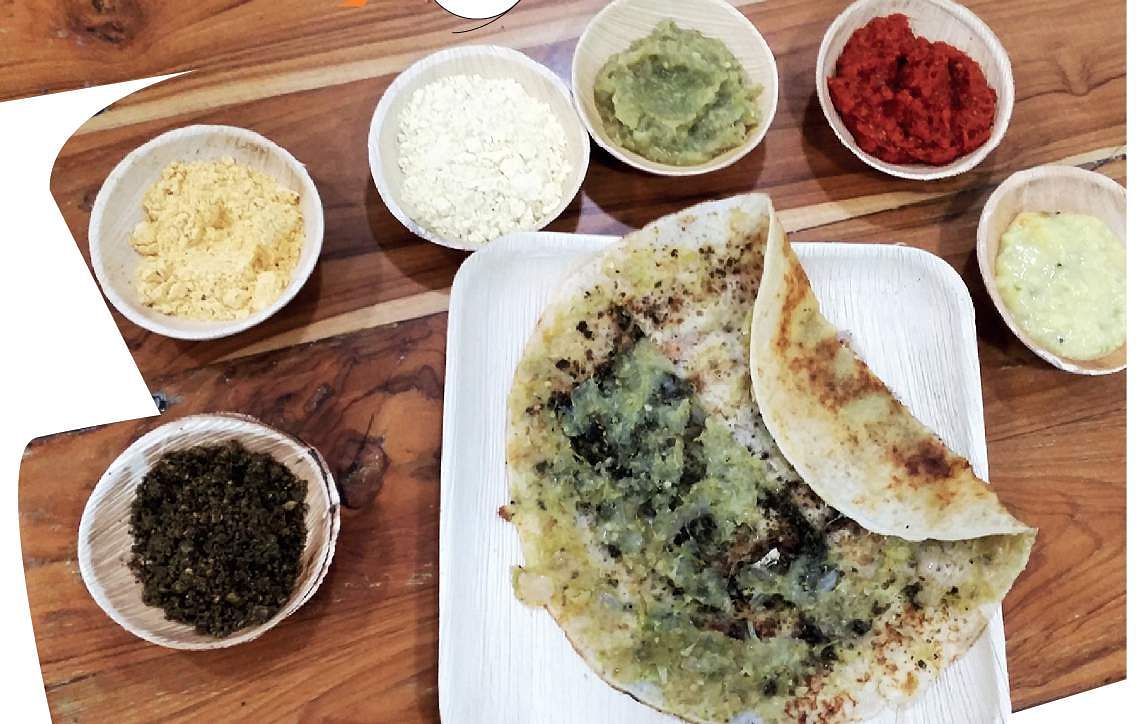 In Hyderabad, there are only a few places that can be visited for this special dosa. House of Dosas, with their outlets in Banjara Hills and Madhapur, serve a variety of delicacies from the Kadapa region. Apart from their signature Erra Karam Dosa with Bombay chutney and Pachhi Karam Dosa, they also have a special dish called Udakapettina Karam Dosa, where a tamarind based powder Chinta Podi is added to the dosa giving it a tangy edge.

Shares Abhishek Mitta, who owns the outlets and hails from Kadapa, that the dosa recipes in the district have subtle variations, and they have incorporated special chutney recipes from their family home. They source the ingredients including the red chillies and ghee from their native place to serve the most authentic versions. Priced between `80 and `110.

Sabyasachi is a food explorer and blogs at www.foodaholix.in