There’s a saying that every experience shapes you into the person you are.

HYDERABAD: There’s a saying that every experience shapes you into the person you are. But what if multiple people have similar experiences as you? What if those people have experienced heartbreak, sexism, abuse, made mistakes, and ended up in the same place to set things right? What if all of those people were women? As you read Anita Nair’s Eating Wasps, you learn that coincidence doesn’t only happen in fiction, because all the women in this book are someone you know.

Eating Wasps is the story of Sreelakshmi, an author who committed suicide in 1965 because of a number of stigmas surrounding women back then. Though she yearns to be released, she is imprisoned in this living world because of one selfish action that her erstwhile lover made. And she ends up in the back of a cupboard, now languishing at a resort called ‘Near the Nila’.

Discovered by a little girl hiding in the cupboard, Sreelakshmi, while telling us her story, also discovers those about the people who hold her in their hands. Be it Megha, Urvashi, Brinda, Najma, Liliana, Maya, or the sisters Theresa and Thomasina, she learns that all of their lives have one thing in common – pain.

Eating Wasps, with a metaphorical title as this, is a poignant story of many women who are battling their own demons in their own ways. It starts off rather cryptically and with the number of characters being introduced with each passing chapter, it threatens to become too rushed, too unfulfilled. However, despite this, Anita Nair takes these characters and their storylines and turns them into a heartbreaking story of hope, redemption, and strength. 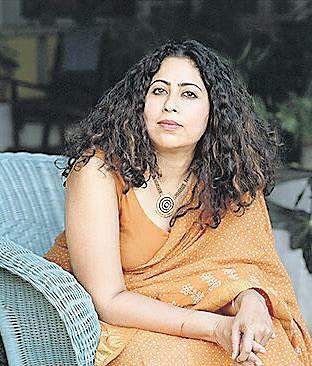 In its 255 pages, Eating Wasps talks about a number of topics and admirably rounds them off. It talks about child sexual abuse, acid attacks, infidelity, the heart’s deepest desires, a woman’s place in the world and the misogyny, living with disease, and so much more.

A few of the chapters have appeared in magazines as standalones, and it is an ode to the author’s ability to meld them together that the book as a whole becomes such a worthwhile read.

Every single one of Anita Nair’s characters, in the limited limelight that they have, is beautifully written. Their conflict, their dreams, their remorse, their heartbreak – all of these merge, multiply, and attack your psyche with such an intensity that the chilling reality of these fictional words are driven home to you.

There are places where the reasoning seems a little flimsy, but when you look at the book from a bigger perspective, all of that melts out and leaves behind the red plumes of heartbreak.If you are looking for a compelling read and won’t mind shedding a few tears, Eating Wasps is the one you should be picking up. Anita Nair’s genius will make sure of that.Publisher: ContextPrice: `599

Now we are on Telegram too. Follow us for updates
TAGS
Eating Wasps Feminism Women writers Sreelakshmi sexism