HYDERABAD: Orthopaedic surgeons at Apollo Hospitals said that Dr Paripati Sharat Kumar and his team successfully performed double hip replacement in one sitting, on two patients from Africa. The patients have since recovered and are all set to walk out of the Hospital on discharge, for their respective countries. Hillow Mohamed Hassano, 66, from Kenya and Mohamme Abdi, 49, from Somalia, underwent a bilateral hip replacements. 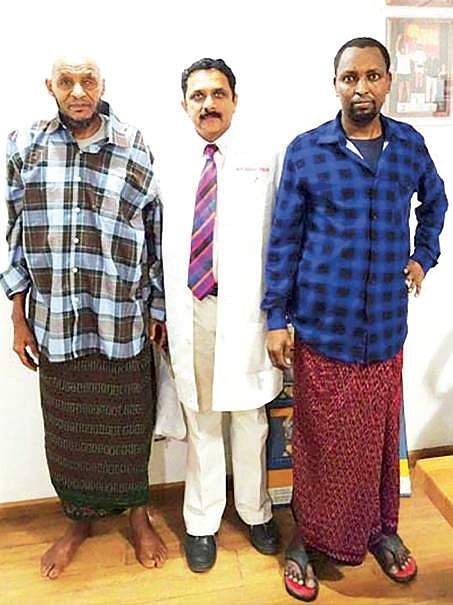 Both patients reportedly came with a complaint of suffering from severe pain and stiffness in both hips due to osteoarthritis, leading to restricted mobility in spite of taking regular painkillers. In a press release, the hospital said they were able to get back on their feet although they were wheeled in as patients. Currently approximately 10 percent of total knee replacements are bilateral however less than 1 percent are bilateral total hip replacements.

According to Dr Sharat Kumar, there is convincing clinical evidence indicating simultaneous both hip replacements to be as safe as sequential hip replacements. There are multiple benefits and many patients would prefer to undergo both same day and avoid another surgery and rehabilitation, thereby saving on significant time as well as overall cost of surgery.

In the case of these two patients who came from a different country, performing two surgeries to replace one hip at a time, would have escalated the cost and prolonged their stay here, besides giving scope for complications and infections. However patient selection is crucial as all patients are not suitable candidates and each one of them has to be considered on an individual basis in order to avoid complications, particularly in the elderly with multiple medical conditions.