Of Kismat, Karma and Kaliyuga

It is the story of Ekalavya an underachiever, innocent and supposedly cursed child, who in the end, conquers the world and demolishes the evil.

HYDERABAD: If you are familiar with words such as Aatma, Brahmacharya, Advaita-Vedanta, Kshatriya and other such allied ones and love a fast-paced, action-packed book that takes you back to the days of the Vedas, ‘God of the Sullied’ by Indian author Gaurav Sharma is the kind of book you should curl up, with a hot cup of coffee on your bedside table. A line in the prologue reads: “Civilisations, empires and dynasties learnt how to conquer, but could never learn how to sustain their victories by changing with time. .” That in short, is what this book is time. The sutradhar is none other than Time, or Kaal, reminds me of watching Mahabharatha in the Doordarshan days, in the 1980s. My favourite line in the book where Time states: Behind yesterday’s success, today’s victor and tomorrow’s conquests there is only one strategy and that is change. 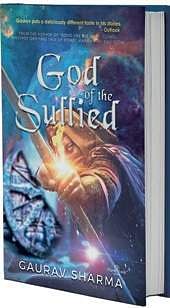 It is the story of Ekalavya an underachiever, innocent and supposedly cursed child, who in the end, conquers the world and demolishes the evil. The story revolves around 9th century India, just after the sudden demise of Adi Shankaracharya – a time when a unique and exotic Ikshavaku tribe lives somewhere in Rudraputra. Their scion, Eklavya will take birth with a purpose of demolishing the evil from the earth.The child is declared mystic. However, he would later be clutched in the hands of Kali, the darkness. The rise of Kali, torments the holy lands of ninth century Indian subcontinent. Sudden death of Adi Shankaracharya leaves the world howling in the need of a messiah. The birth of a mystic child, Eklavya, who would later be tested by time, brings a curse on the state of Rudraputra, claiming many lives.

Abandoned by his village and after deemed as cursed for bringing bad omen in the region, Eklavya was saved from giving up his life in the Ganges and was taken up by an old man who nurtures him. It is then revealed that one of his near ones was the real culprit of the deaths caused in his family. That culprit to pay back the cost of his spared life, helps Eklavya become the King of Rudraputra. he then restores order in his kingdom.

The book is a page-turner, almost like a thriller. That you need to go back in time and imagine Bahubalisque scenarios is even more fascinating.
Ideal read for those who love strategy, conspiracy and multi-layered characters in their fictional reads. The writer promises a sequel too!
The book ‘God of the Sullied’ is a 240-page paperback by Think Tank books and priced at `225.