As the world progresses towards clean energy, India still struggles with its excessive use of fuels particularly because of automobiles.

HYDERABAD: As the world progresses towards clean energy, India still struggles with its excessive use of fuels particularly because of automobiles. While the Tesla has become a rage for most in the West, it might take a while before our country catches up. Meanwhile, a Telangana-based startup is doing its bit in changing the course of how we view commute. E-Trio, founded by Sathya Y aims to have the country’s citizens using 100% clean energy in their automobiles. In that effort, they created a set of automobiles which will help you reduce your carbon footprint. By a simple process called retrofitting, a fuel vehicle can turn into an electric one. Retrofitting literally means alter or modify something to a state different from how it was manufactured. “Retrofitting is the way to go and need of the hour and these smart cars currently are the most efficient and economical cars compared to our counterparts in the market,” says Sathya who nutures a vision to turn the entire country into a 100% EV (electric-vehicle) country.

Why it’s better
It took Sathya and his team over two years to perfect the system which enables a vehicle to become an electric vehicle. And now they are the first in India to successfully get ARAI approval for retrofitted car kits in Alto and Wagon R. While retrofitting isn’t an alien concept for a few high-end models, it is not as common for the economical range. “Our vision is to create e-Mobility which inspires & nurtures pollution free India. We believe that affordable range is the key to helping electro mobility achieve a breakthrough in the near future,” Sathya says. The retrofitting kit along with the car itself costs less than $10,000 which amounts to about `7 lakh. He adds, “After very meticulous research and development we are finally ready to launch retrofitted cars ready to go on road. We have about 1000 cars ready for sale.” Now the cost of a retrofitted car is a little higher than that of the regular economy vehicles available in the market. But Sathya has an answer for those counting pennies. “While you shell out a chunk of your savings for the vehicle itself, constant fuelling of the car would also burn a hole in your pocket. Electric vehicles might cost you higher in the beginning but it’s an expenditure that will ensure no more cost to keep it running later on,” he says. 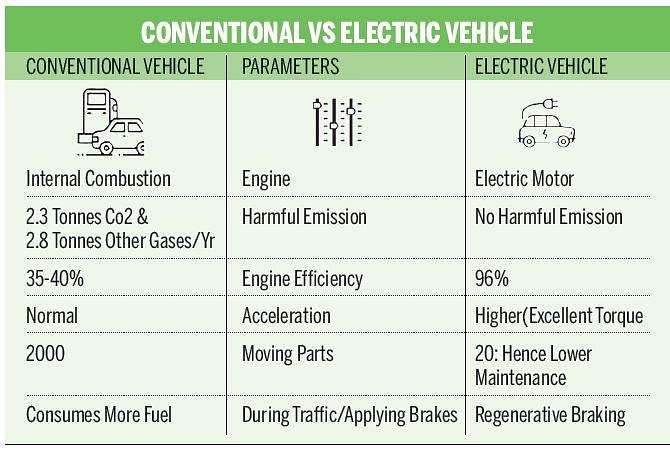 No compromise
The world looks towards Tesla for the idea of an electric car. And the Tesla model’s battery charging stations play a big role in its functioning. Retrofitted cars as Sathya says have no special charging points that are hard to find. “You can charge the car at any regular charging point you would use. Also, one single charge would take you 150 - 180 kms,” he assures. The specifications of the car are also impressive. The battery can function perfectly for 3000 cycles. It charges for 5 hours to reach full charge and just an hour if it’s Fastcharge. With just 20 moving parts as compared to 2000 in a conventional-vehicle, the cost and maintenance is kept at check.

Forget your doubts
One of the common inhibitions that people express for using an electric vehicle would be its efficiency and also safety. Etrio has answers for everything. “The car can go at a speed of 80 kms/ hour. It could go up to 120 kms/ hour as well but we do not suggest that considering safety and for better performance. The car can go from 0 to 60 kms/ hour in 5 seconds. So all the concerns that most automobile enthusiasts have are cleared off there. What’s more ,you’re doing good for the environment,” he quips. The vehicle also emits almost no sound,cutting down noise pollution as well.

Cover the nation
Sathya who self-funded this company, has started off with selling these vehicles to friends and family is excited about how the vehicle is picking up. “I am glad people are warming up to the idea,” he says adding, “I am actually looking forward to taxi drivers and cab aggregators to pick up on the EV as it would benefit them the most - they are the ones who clock in a lot of distance in a day and who fill up most of the city’s roads.” Sathya dreams of being able to contribute to government’s mission of 100% EV by 2030 and a greener ride towards Swachh Bharat.

Now we are on Telegram too. Follow us for updates
TAGS
eco-friendly