3% drop in Hyderabad crime rate, dowry deaths up by 11%

The cases of rioting, robberies, crime against women have no significant change between 2018 and 2019.

HYDERABAD: Even as the overall crime rate in Hyderabad city has registered a 3 per cent drop in 2019, cases of dowry deaths, outraging modesty of women have been gone up by 11 and 21 per cent respectively.The cases of rioting, robberies, crime against women have no significant change between 2018 and 2019.  However, crime against women witnessed a slight increase with 2,305 cases reported this year as against 2,286 in 2018. 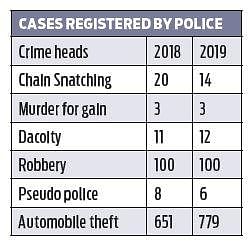 Presenting the annual crime report, Hyderabad Police Commissioner Anjani Kumar said here on Thursday  that a total of 15,598 cases were registered in 2019 as against 16,084 cases registered the previous year.  The reports indicated that the overall crime rate has been gone down by three per cent in the city.
The statistics indicate 30 per cent reduction in chain snatching, 2 per cent reduction in property offences and bodily offenses by 9 per cent, Anjani Kumar said.

As far as activities of outlawed Maoists, the Police Commissioner said that there was no trace of Maoist activities in the State. ‘’The inputs we received from Intelligence sources is that Maoist movements are being reported in areas bordering Chhattishgarh and Maharashtra,’’ he said.

Anjani Kumar said property crime detection is 58 per cent and recovery is 61 per cent despite the fact that there are 34 per cent vacancies in the Hyderabad city police.

Explaining future plans, the Police Commissioner said with focus on empowering citizens, police would start registering petty cases and FIRs.  Police would conduct audit of public spaces by identifying hotspots, conducting root cause analysis and thereby taking remedial measures for making the city safer for women. Over 1,400 cyber crime cases were registered in the city this year.

Now we are on Telegram too. Follow us for updates
TAGS
Hyderabad crime rate down