The Nizam's descendants, Prince Mukarram Jah – the titular eighth Nizam of Hyderabad – and his younger brother had joined hands with the Indian government in the legal battle against Pakistan.

HYDERABAD: In a major win for the country and the kin of the Seventh Nizam, Osman Ali Khan Bahadur, the United Kingdom High Court on Wednesday upheld India’s claim over Pakistan’s in the 70-year-old ‘Hyderabad Fund case’ involving 35 million pounds.

The case dates back to September 1948, when Nawab Moin Nawaz Jung, an official in the Nizam’s administration, transferred 1 million pounds to the account of Habib Ibrahim Rahimtoola, the then high commissioner of Pakistan to the UK.

The transfer was rendered unauthorised by the Seventh Nizam, following which the bank authorities froze the funds until the rightful claim was established. Since then, the sum, amounting to Rs 307 crore, has been locked in the National Westminster Bank in the UK.

In his judgement, a copy of which TNIE possesses, UK High Court judge Marcus Smith tore down several claims made by Pakistan and upheld the ones made by India.

The neighbouring country had claimed in its appeal that the money was deposited to pay for weapons Pakistan supplied to the erstwhile Hyderabad State during Operation Polo, and for keeping it out of India’s reach, as Hyderabad was acceding to the Union then.

Smith, in his judgement, found no evidence supporting Pakistan’s ‘weapon money’ claim, although it was noted that Pakistan did supply weapons to the Nizams during that time. “I can see no reason why Moin — acting on behalf of Nizam VII — would have transferred the entire balance from the Second Account to the Rahimtoola Account without any clear understanding of how this money would be used... There is no evidence of any such understanding,” Smith noted, adding that Pakistan had made no request regarding the payment.

Smith also upheld India’s contention that the transfer was made on trust, and not “absolutely for the benefit of Pakistan” made by one sovereign entity to another. “The fund was not held absolutely for Pakistan, but was held on trust. The trust was a constructive trust alternatively a resulting trust,” the judge said. A constructive trust is a duty by one person or company to hold some property for another person or company.

Another factor that worked in the country’s and the Nizam’s grandsons’ — Mufakkham and Mukarram Jah’s — favour was that the court found that the transfer made by Moin was not authorised by the Nizam VII. Smith observed this while upholding India’s restitutionary claim.

Smith also slammed Pakistan for asserting a defence of limitation when India moved the restitutionary claim against it. “ I hold that it is an abuse of process for Pakistan to assert a defence of limitation in relation to the Princes’ and India’s restitutionary claim against her and that the paragraphs in Pakistan’s statements of case asserting this defence must be struck out,” the judge said.

In its appeal, the neighbouring country brought up the annexation of Hyderabad by the Indian Union and said the Centre’s claim to the money was ‘illegal’. However, Smith again struck down Pakistan’s argument, terming it “analytically irrelevant”. The court also struck down that argument because Mufakkham Jah and Mukarram Jah had earlier entered into an agreement with the Central government over sharing of the funds.

Meanwhile, closer home, the kin of the seventh Nizam, who has also claimed a share in the Rs 307 crore fund, rejoiced over the decision. Nawab Najaf Ali Khan, a great-grandson of the Nizam VII, said, “We welcome the judgement of justice Marcus Smith. The high court has rightly rejected Pakistan’s claim in favour of India and the descendants of the Nizam VII. The family has long awaited this judgment.” 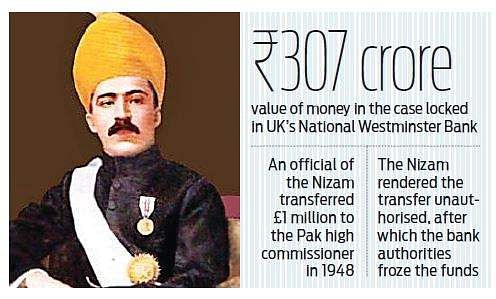 Stay up to date on all the latest Hyderabad news with The New Indian Express App. Download now
(Get the news that matters from New Indian Express on WhatsApp. Click this link and hit 'Click to Subscribe'. Follow the instructions after that.)
TAGS
UK High Court Nizam of Hyderabad Hyderabad Nizam property

If India has de-radicalisation camps, Centre should make clear where they are: MY Tarigami