GHMC polls: After heavy campaigning, around 74 lakh voters expected to vote in 150 wards

The use of ballot papers and the attendant advantages and disadvantages are known to old timers but the millennials are unaware of them.

HYDERABAD: The D-day has arrived. After the high decibel campaigning by political parties for the Greater Hyderabad Municipal Corporation (GHMC) polls, 74.67 lakh voters are getting ready to decide the fate of the contestants in 150 divisions on Tuesday when the State Election Commission (SEC) would conduct the elections.

After a very long time, the elections are going to be held using ballot boxes instead of EVMs. The use of ballot papers and the attendant advantages and disadvantages are known to old timers but the millennials are unaware of them.

The polling and counting of votes would be long, cumbersome and tedious, and the results are usually delayed inordinately unlike when EVMs are used with the results declared in just a matter of hours. 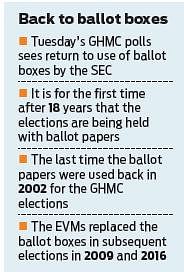 But the State Election Commission (SEC) decided to use ballot papers and boxes for this election in the wake of the complaints by the party which loses an election that the EVM machines had been tampered with by the party in power to suit its interests.

Also, there is the problem of technical glitches which too delay the declaration of the results. In view of Covid-19 pandemic too, the SEC decided to replace the EVMs with ballot papers so that the voters do not face the risk of contracting infection by pressing the buttons on the machines.

Barring the BJP, a majority of the political parties favoured conducting GHMC elections with ballot papers. As many as 20,024 ballot boxes are being used this time. The last time the ballot papers were used back in 2002 for the GHMC elections.

The EVMs replaced the ballot boxes in subsequent elections in 2009 and 2016. For Tuesday’s polls, as many as 1,122 candidates are in the fray, 81,88,686 ballot papers nave been printed for the purpose and 20,024 ballot boxes have been moved to 9,101 polling stations spread over 150 wards. The ballot papers would have NOTA option for those who decided that none of the contestants are worth electing.

The TRS is contesting in all the divisions, while the BJP is testing its luck in 149 divisions, followed by Congress (146), TDP (106) and AIMIM (51). Even as TRS is bent on continuing its vice-like grip on the GHMC, the BJP, which believes it is at an inflection point in emerging as a doughty contender, hopes to wrest it from the TRS hold and fly its saffron flag.

The Congress, which appeared to be a laggard in the campaign, has tried to make a connect with the voters, while the AIMIM is content with just 51 division though it had made a public announcement that the TRS is not its political ally and that it has no electoral understanding with the ruling party. For TDP, the objective of contesting in the elections is only to dispel the impression that it is a dead duck in Telangana.

Now we are on Telegram too. Follow us for updates
TAGS
GHMC polls Greater Hyderabad Municipal Corporation Hyderabad municipal elections