They loved, they fought, they conquered: 14 Hyderabad couples share their stories

This Valentine’s Day, we give you a sneak-peek into the lives of some couples, who broke the barriers of caste, religion and gender binaries to be with each other.

HYDERABAD: This Valentine’s Day, we give you a sneak-peek into the lives of some couples, who broke the barriers of caste, religion and gender binaries to be with each other 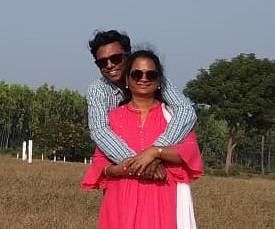 I met Kamini in school. Our love story had a headstart when we ended up spending a lot of time together while I was also training for my automobile career. It was then I decided to seal the deal! When we broke the news to her family, they objected as she is a Catholic and I belong to Vaishya caste. She went into depression and became completely numb. Finally, after a few months, when it was evident to her family that Kamini and I would not change our decision, we got married on December 11, 1998. Today we are blessed with two adorable sons.
— Addanki Raja, entrepreneur 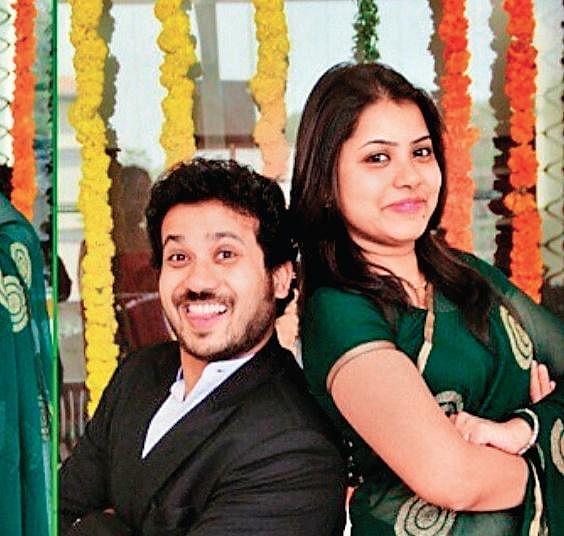 I met my husband Victor for the first time at my place during carol rounds in December 2005. The moment he walked through that door, the first thing that came to mind was, “I’m going to marry this guy.” I didn’t even know his name! The surprising fact is we have been going to the same church since childhood, but we somehow never crossed paths until that moment! We instantly felt connected, became good friends, dated each other for five years and finally got married in 2011. Our parents never objected to our wedding. I feel blessed being married to my first love and we have stuck together through major ups and downs. I could have never asked for a better life partner even though he still leaves his dirty earbuds anywhere in the house except the trash can!
— Aarti David, food blogger 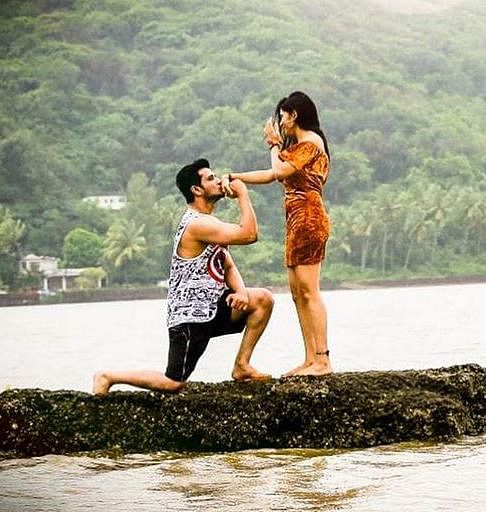 I saw Pallavi Varma at a party and immediately knew she was the one. I knew I needed to talk to her and get to know more about her. I texted her first. Though she was hesitant in the beginning, things slowly took off. I was determined to make it a permanent connection so I visited her in Bengaluru where she was finishing her MBBS. Over several lunch dates and movies, we got to know each other better. After the success of my movie Arjun Survaram, I decided it was the right time to take the leap. So we went to Goa where I proposed to her. She said yes and we got engaged.
— Nikhil Siddharth, Tollywood actor 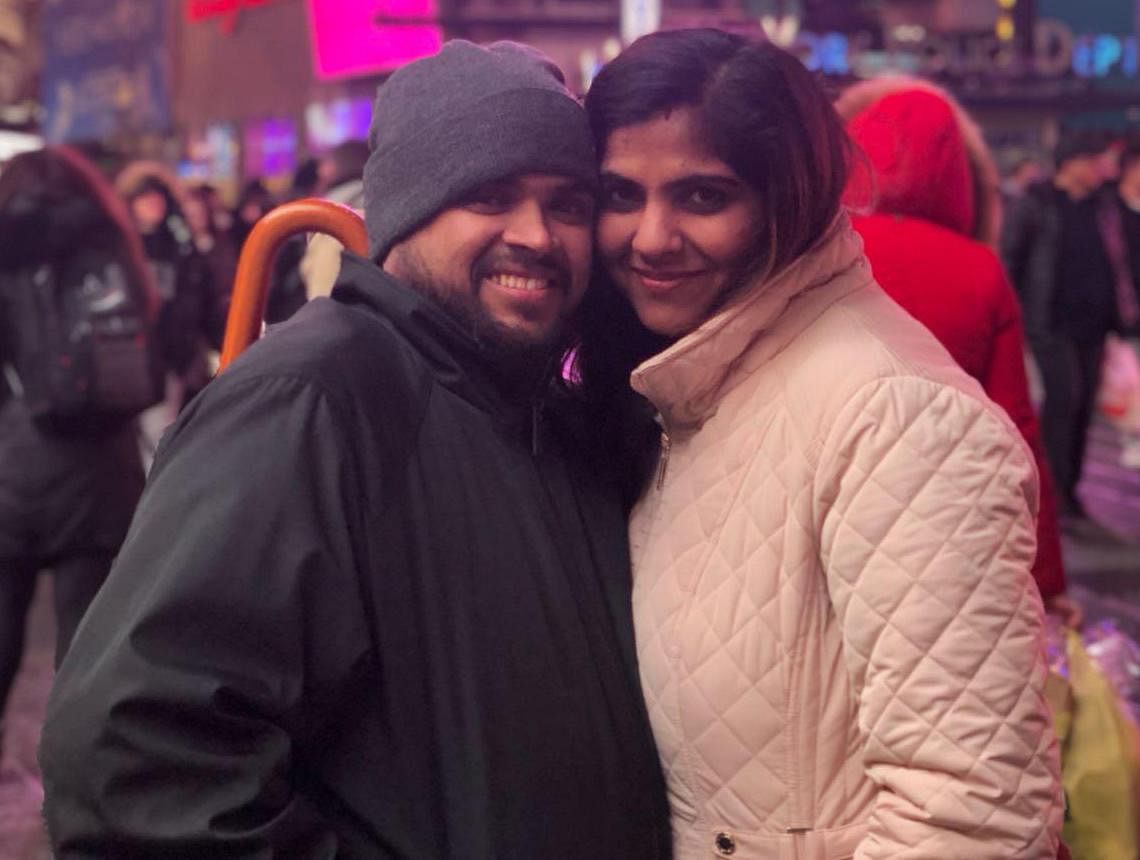 I was in an interview cabin in November 2009, when I was first introduced to Phani as my manager. We always spoke about work and gradually he became my mentor. While working in the same team, we frequently went on chai breaks and talked about subjects other than work. One fine day to my surprise, he proposed to me and I agreed instantly. Our relationship suddenly turned into long-distance as Phani moved to Chennai and I stayed back in Delhi. That whole phase was like a test of strength for us, which we passed amazingly. Ass I am a Punjabi and he is Telugu, our parents objected, but we convinced them and got married in 2017.
— Richa Arora, operations manager 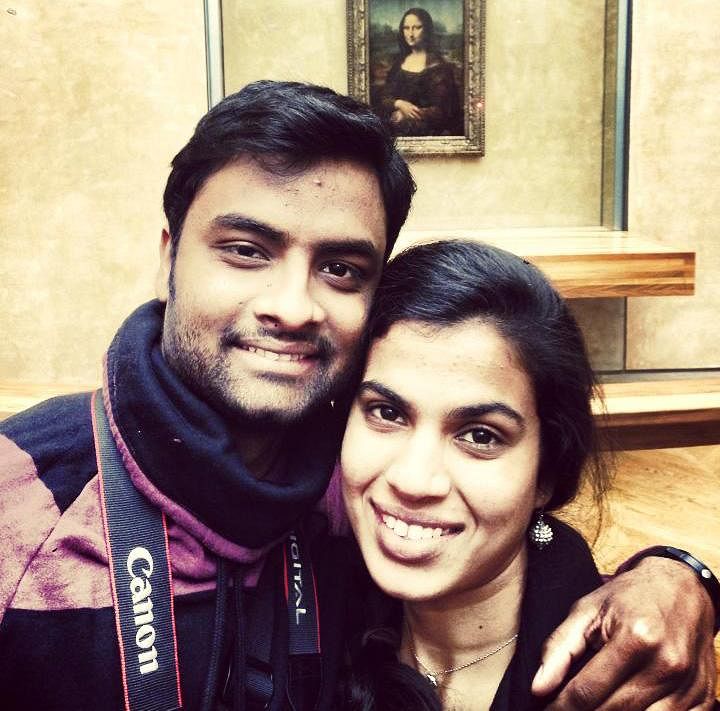 It was 2008 and I was at my first movie recording when I saw Sravana Bhargavi for the first time. I started texting her and she ignored initially, but gradually, our conversations took off. I felt we had a great bond of friendship, though in a telepathic level we knew it was love. Once I felt that this feeling was mutual, I asked her out on a date and proposed to her, and she accepted. In between, we went through a rough break-up. I went back to her and convinced her to hold on to our relationship. We spoke to our families about getting married and my mom objected to the fact that both of us were in the same profession. But finally, she relented, and we got married.
— Vedala Hemachandra, playback singer 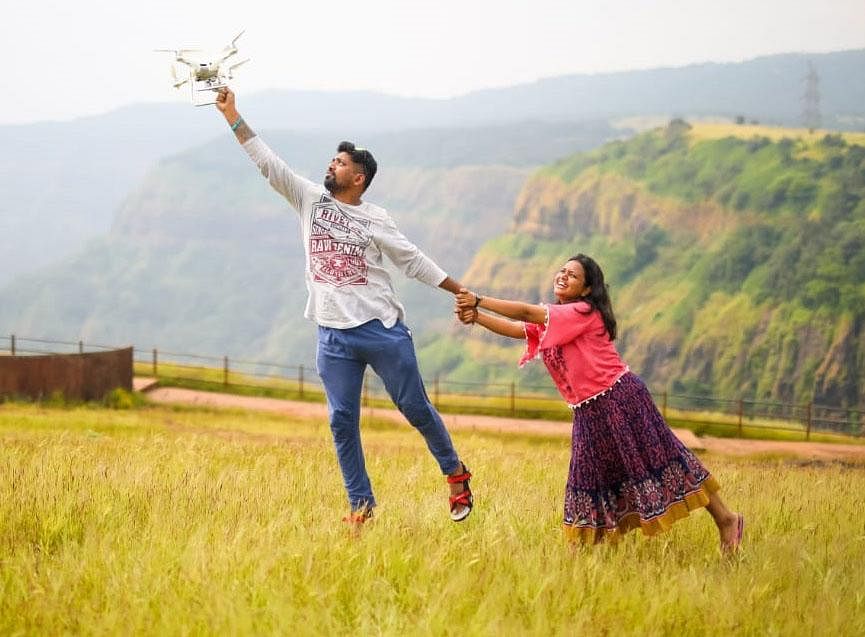 From being classmates to being happily married today, we have come a long way. His friendliness made me fall in love with him. Soon after, I proposed to him on a phone call and he said yes. I then moved to Chennai for my higher studies and he found that phase difficult. Since he was the only son, his parents wanted to get him married soon. My parents objected too as I belong to a Tamilian family and he is a Telugu. My father asked me to not discuss marriage until my elder sister gets married. I tried to convince my parents by writing letters to them. One fine day, my mother convinced my father. They asked me to invite Kartheek home and the rest is history.
— Rajeshwari Natarajan, lecturer 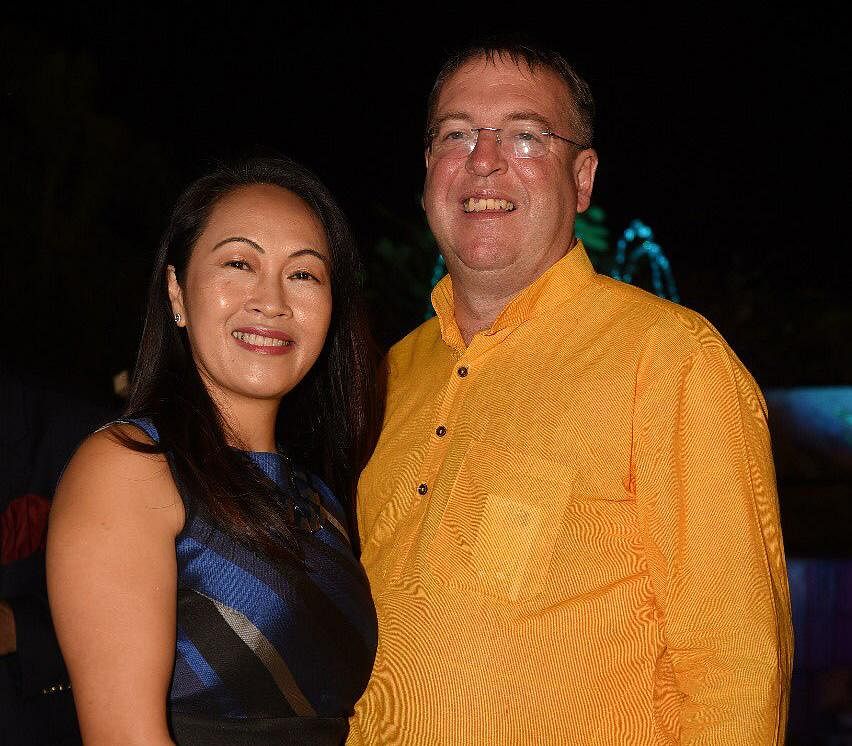 We believe there was a strong element of destiny in us meeting in Vanita’s home city of Ha Long Bay. I had taught two Vietnamese boys English while I was in the UK. 18 years later, these boys, who were refugees, tracked me down and took me on a trip to their home country, Vietnam.  Vanita was visiting her parents for Tet holidays and being fluent in English, she was asked by the local authorities to ‘spy’ on me. The rest is history.
— Dr Andrew Fleming, Andrew Fleming, British Deputy High Commissioner to AP and TS 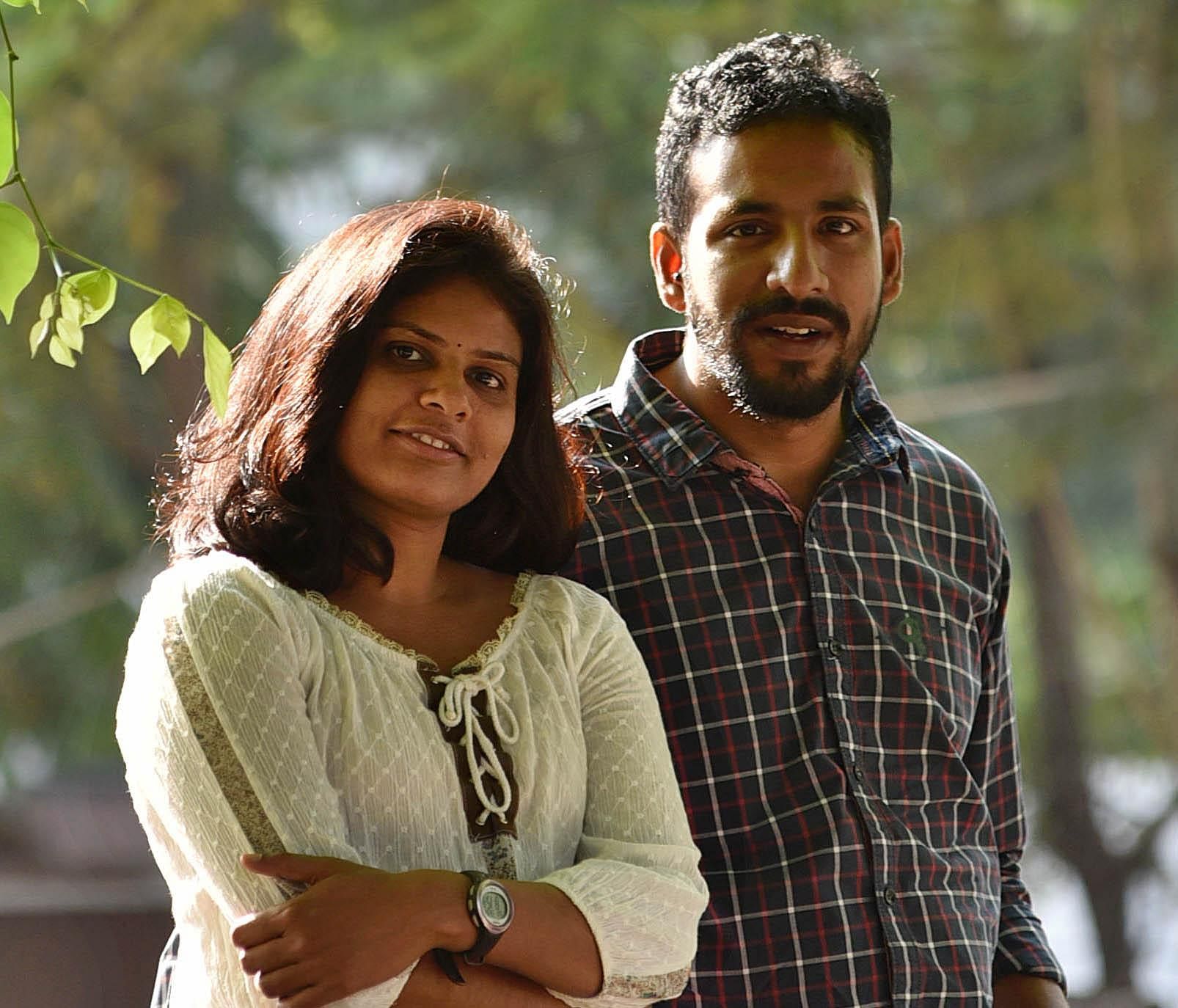 I was in the US when I put my profile up in a matrimonial site. Sashi got interested in my profile after learning that I was a vegan. Although I didn’t plan on connecting with someone from outside the US, our conversation just flowed and it just felt right. I met him for the first time when I came to India to meet my parents. Within a week, we got engaged. I told him I needed to go back to the US and work for some time before we got married. He was supportive but I came back within six months. Our wedding was the first-ever vegan and zero-waste wedding in Hyderabad.
— Deepika Bitra owns Plantarium, a vegan store. Sashi Kiran Tikka is a director 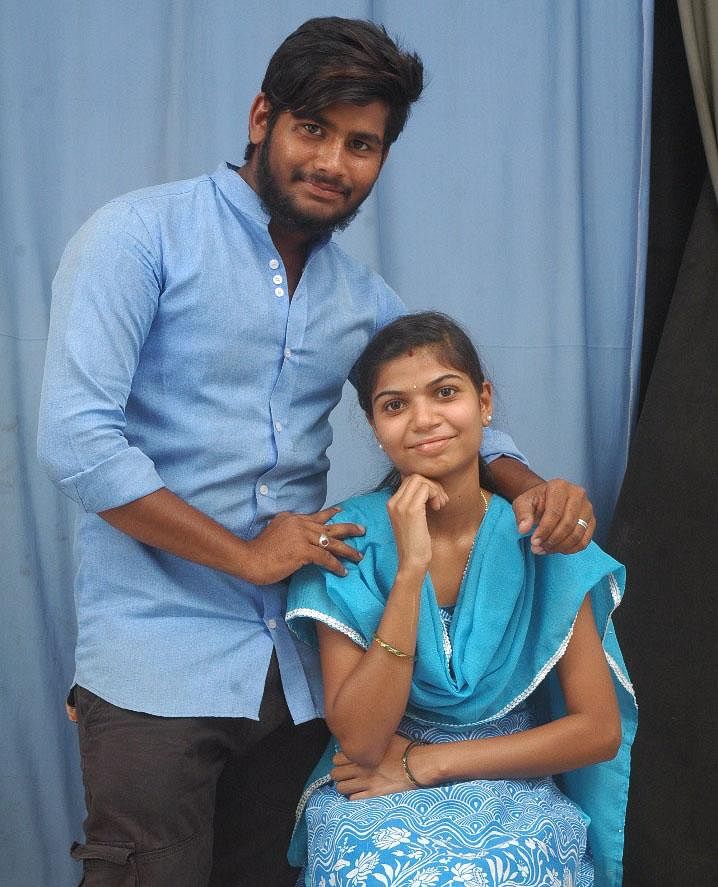 I noticed Lakshmi’s smile during study hour in Class IX and was drawn towards her. I waited for a chance to talk on the pretext of borrowing notes. Finally, I mustered the courage and proposed to her in 2013. She rejected saying that her family would not approve as her sister had committed suicide after her lover from another caste backed off from marriage. I convinced and assured her that we would get married in 2017. We eloped with the help of my friend who brought us to Hyderabad. Meanwhile, people were searching for her and my friends were beaten up. We finally got married at Arya Samaj in 2017. Since I am from a lower caste, I still face hostility from her family though they have accepted the marriage.
— Aravind Kodepaka, salesperson 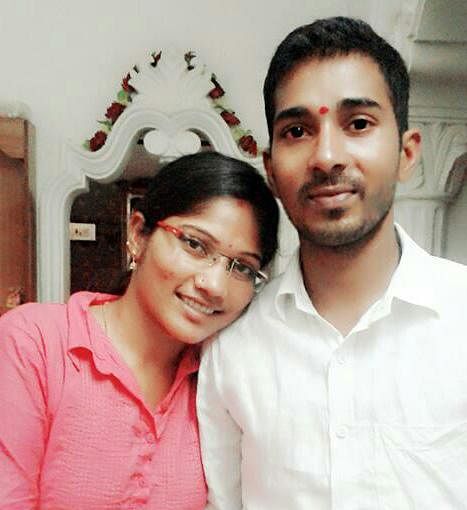 Bharati was my classmate’s sister in Intermediate and I knew I was falling in love when we started talking to each other. We stayed in touch even after moving to different cities to complete education. When both of us were 21, her parents fixed her wedding with someone else because they disapproved of out inter-caste relationship. Out of the fear of being separated, both of us decided to elope. We came to Hyderabad with no money or support but we knew we had to get married and we did! It did not go well with our parents, but they relented with time. There were many financial struggles but we knew supported each other. It’s been 10 years now and we still are learning new things about each other every day.
— Santosh K Thulasi, founder, Bigvend Online Services Pvt Ltd. Ritika and I tied had an inter-faith marriage in  2019. I was born in an Iyengar Brahmin family and my wife in a Catholic household. We were colleagues earlier. After she moved out of the firm, we began hanging out. Soon, we told our families. it was a mutual decision everyone agreed to. Initially, her parents were a little worried about our compatibility. Planning two kinds of wedding ceremonies was quite taxing for us, but today, we are happily married.
— Srinivas Kunduru, IT professional 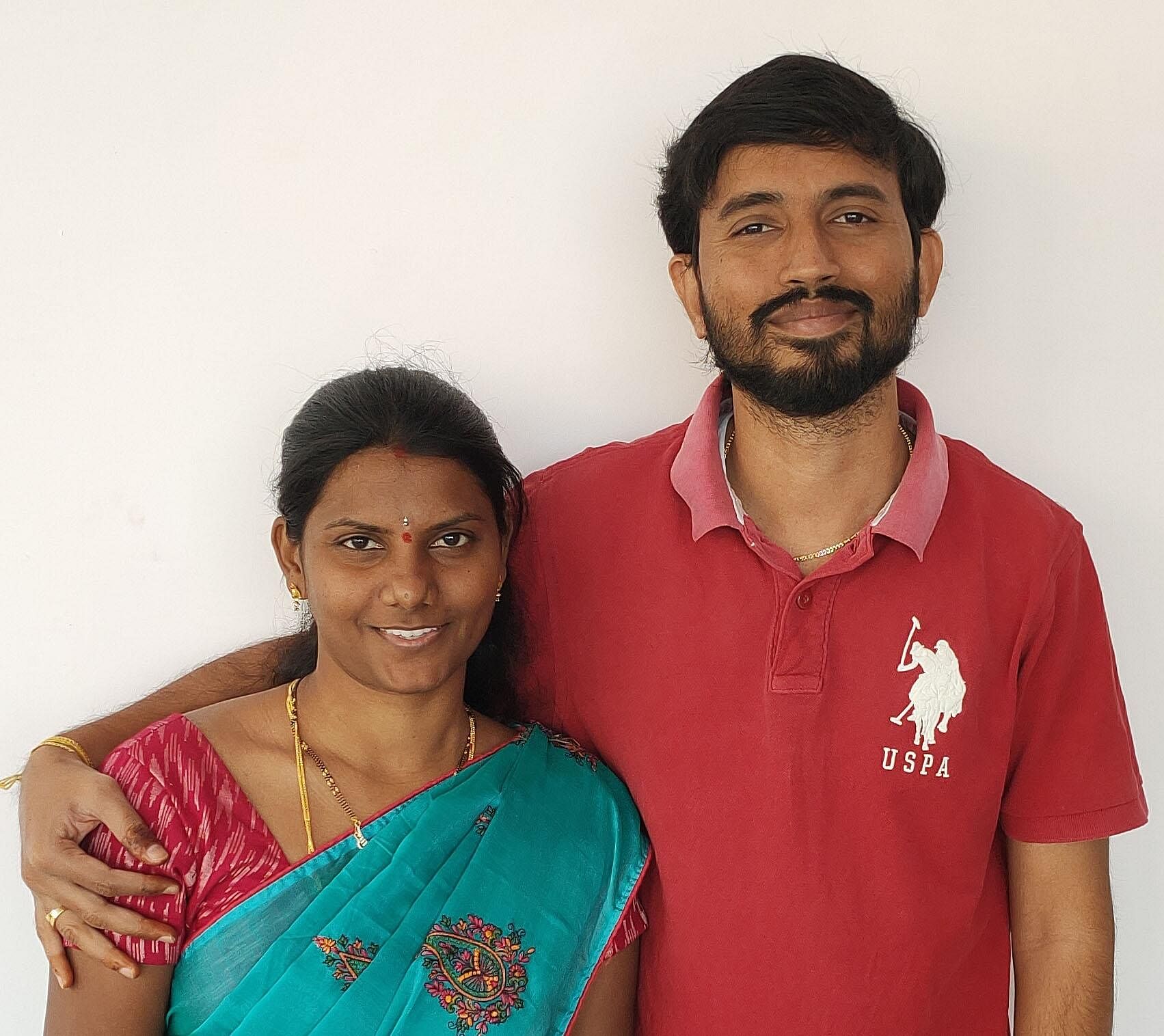 During my graduation days, I stayed at a hostel at Medipally. I first saw Srivani in November 2008 in my colony. I later discovered that she was my classmate. I confessed my love to her after an year of heartfelt friendship. She immediately accepted and our beautiful journey went on for the next 10 years culminating into marriage on February 5, 2020. The fact that we had been together for such a long time without any break-ups or conflicts helped us to convince our parents to break barriers of caste and socio-economic status.
— Bhavith Kumar Nayak, stocks trader 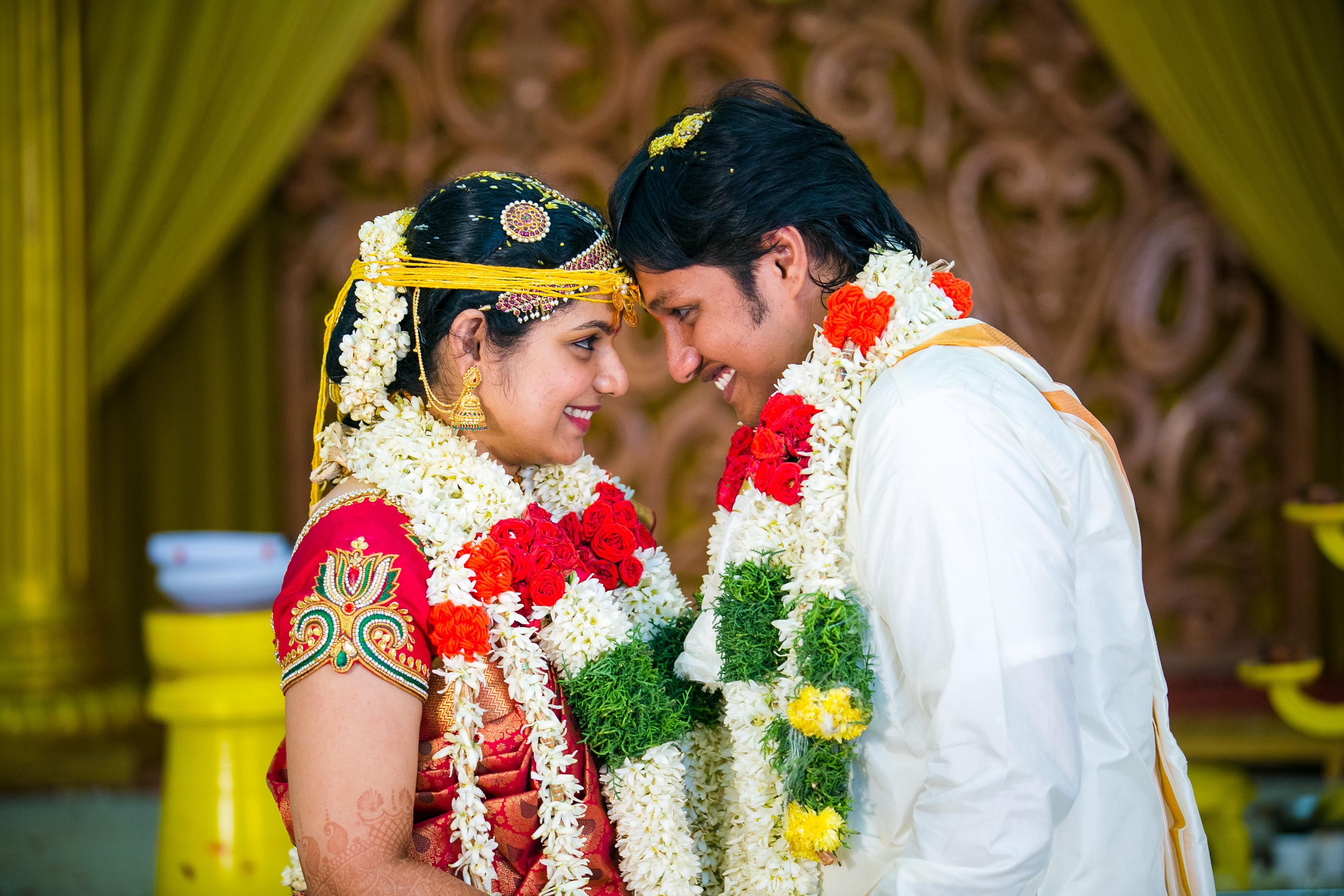 We were classmates at a college in Chennai. I was the quiet type, while he was always ready to chat away to glory. Eventually, we became friends. It was, however, after we finished college that I understood our relationship. Because he was a Tamilian and I a Telugu, we had to convince our families, and we got married in 2016.
— Shravya Indukuri, software engineer 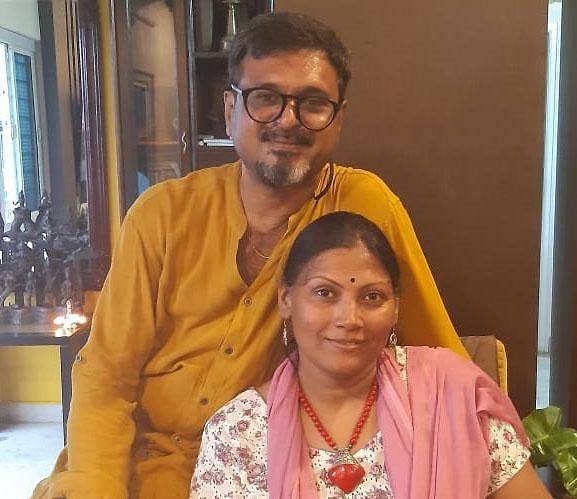 We were both students of Fine arts at Vishwabharathi Institute in Kolkata and Rajeev was my senior. I was attracted to him, but I did not express my feelings for a long time. Little did I know that he knew about my feelings. My best friend had revealed it to him but it was only when one of his friends was trying to woo me, he confronted me. But immediately after that he had to leave for Mussorie and I to Hyderabad to pursue higher studies. Our modes of communication were letters and STD calls. My parents objected since he was a Malayali and I a Bengali. After almost an year, our parents relented
— Rajeev Nayar is Tollywood art director. Sumana Bose Nayar is an artist 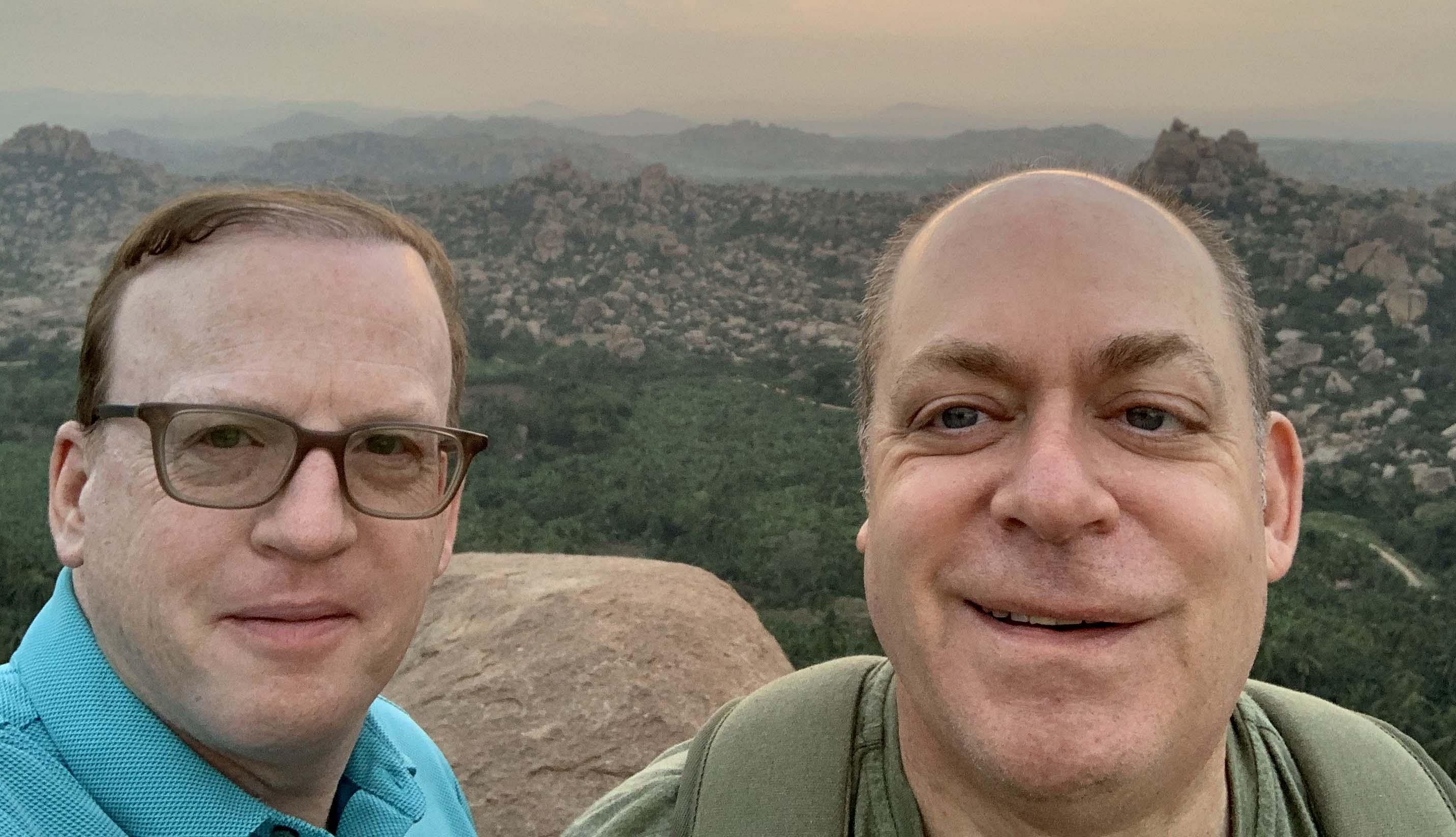 We met in Washington.  We had a connection early-on based on our love for travel and international careers. We made each other laugh. Most importantly, we found that our values were similar. We were blessed that out families embraced us. After I finished my tour in Kabul, we spent the summer visiting family and friends across the US.
— Joel Reifman, US consul general, Hyderabad, and spouse Perry Melton - former COO, Inmarsat

Stay up to date on all the latest Hyderabad news with The New Indian Express App. Download now
(Get the news that matters from New Indian Express on WhatsApp. Click this link and hit 'Click to Subscribe'. Follow the instructions after that.)
TAGS
Valentine’s day Hyderabad love stories