The call of the wild

HYDERABAD :  It was only the last month that artist Artist Bolgum Nagesh Goud curated an interesting art exhibition of three-dimensional elephants, crafted in fiber-glass medium. This was also to extend empathy towards elephants whose existence is in danger thanks to poaching and other factors. What’s more interesting other than the initiative is that a part from the proceeds went to adopting an elephant in Nehru Zoological Park. The animal is named Sita.

Talking more about this, the artist Nagesh informs, “The money will go to various medical, sanitary, and dietary needs of the animal.” And quite interestingly, it’s not just the artists and other big institutions that are adopting the animals, several school children have come forward and adopted animals at the zoo.
So does adopting the animal mean one can take it home? Definitely not! You can’t think of a white tiger growling in your house or an elephant sniffing your neighbour’s garden. It’s a symbolic adoption. “It’s an initiative to bring an emotional connection between animals and humans. 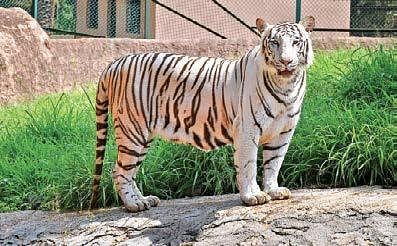 Several children see their parents doing it and then insist that they also want to be a part of this,” informs Kshitija N, curator,  Nehru Zoological Park. That’s how students of Nasr Boys School, Serilingampally collected money among themselves and adopted a white tiger named Khavi the last year and again the children are coming to the zoo situated at Bahadurpura to re-adopt. Spread over an area of 380 acres, the zoo has 172 species which includes birds, reptiles, terrestrial animals and exotic ones.
The 57-year-old zoo draws several lakh visitors every year.

No wonder then that the initiative ‘Adopt the Animal’ which started in 2014, has several takers. Adds Kshitija, “State Bank of India has been adopting 15 tigers for several years. Many other organisations and families have also come forward and adopted the animals.” As of now the rates for adoption range from `0.20 lakhs to `5 lakhs per annum. The categories, other than elephants and tigers, include varieties like panther, jaguar, cheetah, emu, baboon, crocodile, tortoise, macaw to a range of small birds. And what benefits do the people adopting the animals get? They get tax exemptions under Section 80G (2) & (5) of IT ACT 1961. Other than that they are allowed free entry to the zoo. They can also have the preferential allotment of the reservation of the guest house.

They also get a certificate of the adoption which bears the photograph of the adopted animal. From April 2019 till date an amount of `421,7000 has been generated through this scheme.The funds raised through adoption not just go for the benefit of the adopted animal but also towards the conservation of those species which are considered endangered. Need we say more when today is World Wildlife Day? — Saima Afreen  saima@newindianexpress.com