Take passes, but find your own transport

Police start issuing inter-State e-passes to stranded students, tourists who have a vehicle or can hire one to move

HYDERABAD: The Telangana police started issuing e-passes to several students and tourists, stranded in Hyderabad and across the State owing to the lockdown, so that they can return home. But, only those who have their own vehicle or can hire one would get the pass, officials said. An officer, monitoring the e-pass exercise, told TNIE that they began to accept applications online keeping in view the travails of those stranded. And, the response was tremendous.

The police received thousands of applications within hours of launching the online facility, especially from stranded families, who were waiting to travel to their native States using passes approved by the Telangana State Authorities. "The number of passes issued from Sunday morning was nearly 7,000, with additional 10,000 waiting for validation and approval," officials said. 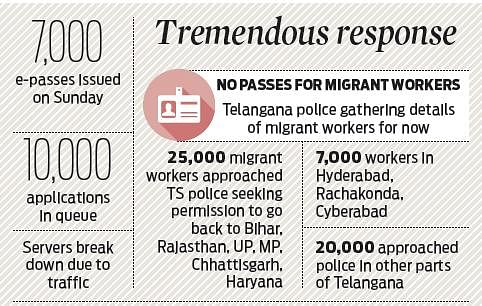 However, the online facility was down as its servers could not take the load. The officials said on account of heavy traffic, they decided to rest the servers for a while and asked the applicants to wait for a few horus before applying. The Telangana police, including the Hyderabad, Cyberabad and Rachakonda police commissionerates, said they were only gathering details of migrant workers for now.

"We are not issuing the pass to migrant workers. We started to collect their details at all police stations and will prepare a report of the number of workers State-wise. We will submit the report to the government for a final decision. It is expected to take a call on this soon," a senior IPS officer said. Meanwhile, approximately 25,000 migrant workers approached the Telangana Police seeking permission to go back to Bihar, Rajasthan, Uttar Pradesh, Madhya Pradesh, Chhattisgarh, Haryana and other States. While Hyderabad, Rachakonda, and Cyberabad reported 7,000 migrant workers, about 20,000 approached the police in other parts of Telangana.

Now we are on Telegram too. Follow us for updates
TAGS
Telangana Hyderabad students e passes travel passes