The State government will deposit the crop loan waiver amounts directly into the bank accounts of farmers.

HYDERABAD:  Despite the lockdown denting its revenues, the Telangana government released Rs 7,000 crore for Rythu Bandhu for Vanakalam (Kharif) crop and another Rs 1,200 crore for the crop loan waiver, a total of Rs 8,200 crore on Thursday.

The State government will deposit the crop loan waiver amounts directly into the bank accounts of farmers. In the first instalment crop loan waiver, an amount of Rs 1,200 crore will be deposited into the accounts of 6.1 lakh farmers. Agriculture Minister S Niranjan Reddy and Finance Minister T Harish Rao held a review with finance and agriculture officials on Thursday to finalise the modalities. 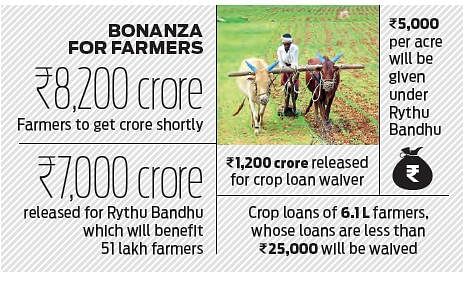 The Ministers directed officials to deposit amounts immediately into the accounts of farmers, whose crop loan amounts were Rs 25,000 or less. Crop loans would be waived in four more instalments later for farmers whose loan amounts were above Rs 25,000 and less than Rs 1 lakh.  Harish said the funds for Rythu Bandhu had also been released on Thursday and the amounts would be deposited into the accounts of farmers directly. Rythu Bandhu stands to benefit 51 lakh farmers who are cultivating 1.40 crore acres.

Now we are on Telegram too. Follow us for updates
TAGS
Telangana Rythu Bandhu crop loan waiver