It's not easy battling mental health issues all by yourself, it's always good to reach out and seek professional help

HYDERABAD: World Mental Health Day is observed on October 10 every year. Over 80 per cent urban Indians are laying special emphasis on building their physical immunity, while 76 per cent of them opine that maintaining physical/mental health helps in having better financial immunity. This was revealed in a survey conducted by SBI Life Insurance on 'Understanding consumer attitude towards financial immunity', where one of the questions revolved around 'mental and physical immunity'. In India, the National Mental Health Survey 2015-16 revealed that nearly 15 per cent Indian adults need active intervention for one or more mental health issues and one in 20 Indians suffers from depression. According to WHO, India is one of the worst countries in terms of mental health conditions, particularly depression with the prevalence of depression being has high as 39.6 per cent in some areas.

"With prolonged lockdown and the availability of vaccine still a distant future, stress levels are high since many are anxious over their jobs, finances and health," says Dr Anil Sharma, clinical director, Mom's Belief where they work with parents of children with special needs. Companies are actively adopting programmes to help their staff deal with mental health issues.

Sushil Baveja, executive director - HR, DCM Shriram Limited says, they have a tied-up with a firm to extend a comprehensive support mechanism with complete confidentiality. He says, "We believe in the holistic well-being of our employees. This includes physical, mental, spiritual and financial well-being focused programmes in a calendarised manner."

Apprehension of visiting a doctor
"With the lockdown lifted, visiting a doctor like earlier times is still an option; however, people are apprehensive about contracting the virus in public places," comments Anil adding that they "have seen 6X spike in their home programme which supports and assists parents with special needs children."
Harleen Bagga, founder, Soul Therapy with Harleen Bagga and psychotherapist and psychologist, says, "Counseling works its magic, when rapport develops and the person is able to come out of their comfort zone. 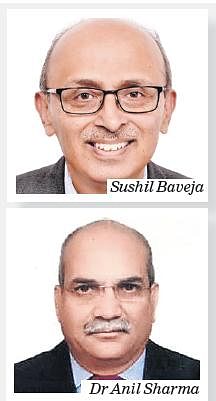 A good counsel at the right time can prevent one from a lifetime of misery." "There are some people with mental health issues who found it difficult and frustrating, while others overcame their issues by adapting to tele-psychiatry," says Dr Aparna Methil, vice-president, operations, Mpower. The company has been in the mental health space for five years and has 60 clinicians.  Aparna says that delay in seeking help is not advisable. "Delay or postponement could lead to breakthrough episodes, increase severity of illness. This is detrimental to mental and physical health," she says.

Is online counseling equally effective?
There is apprehension among people about online counselling. It has its own benefits. "A person suffering from a mental health issue finds it difficult to seek professional help due to the societal stigma attached to it. In such a scenario, online counselling provides not only convenience, but also makes counselling more accessible to people," points out Anil. Aparna feels that online counselling is an important tool in the current scenario and might be the new normal. She feels that, "It is the same as in person counselling except you are not in the same room.

Except for those who have challenges in adapting to technology, people have reported equal benefits of online mode." Echoing the same feelings, Harleen says, "A therapeutic relationship built on trust, growth and understanding is more hard work." Language impairs perception of mental health issue
Rohita Sateesh, rehabilitation psychologist and founder, TalkRemedies says: "Words formulate our thoughts, which trigger our emotions and eventually our behaviour. When we use terms such as depression instead of sadness, or anxiety instead of worry, we are misinterpreting, or underplaying the gravity of that particular mental health issue.  The result being that we may fail to differentiate between a symptom and a natural response. Hence, we tend to ignore consulting a professional.

Mental health is important
"While people have started realising the importance of mental health hygiene, there still is a long road ahead. Along with the awareness drive, it is imperative that we normalise the act of seeking help," shares Anil. Harleen comments: "There is definitely more dialogue about wellness and mental health. But it is clouded with the belief that positive thinking heals all. Self-care begins with accepting your fears, insecurities and demons." Aparna says, "The pandemic has made us aware of the importance of a good immune system. People have started focusing on self-care, which is incomplete without mental well-being."

Now we are on Telegram too. Follow us for updates
TAGS
World Mental Health Day mental health