The Nehru Zoological Park saw the highest number of adoptions last year. This has been a blessing for the cash-strapped zoo during the pandemic

HYDERABAD :  The Nehru Zoological Park has been one of the financial casualties of the Covid-19 pandemic. During the lockdown when it remained closed from March to October, it incurred losses that crossed Rs 10 crore. Entry tickets bought by visitors is the main source of income for the zoo. The money is used for food and general upkeep of the animals. With the second wave of the pandemic, it is feared (and expected) that the footfall is going to dwindle yet again. 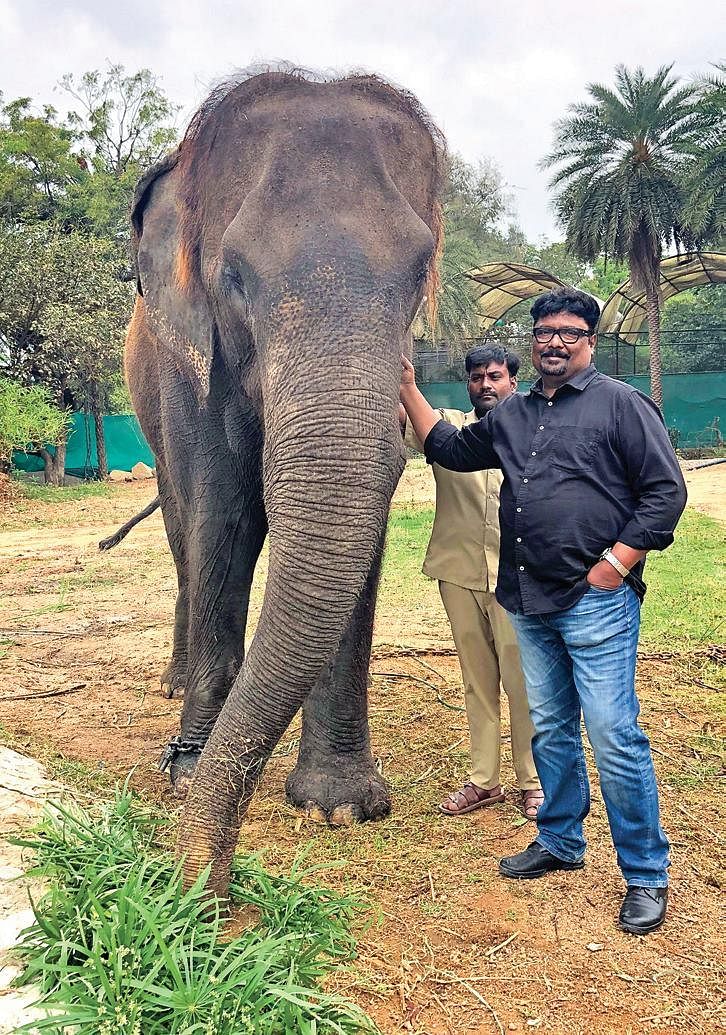 However, the zoo has a small reason to cheer amid the crisis  adopters. Stating that many animal lovers have come forward to adopt animals, A Nagamani, deputy curator of the zoo says: “We saw the highest number of adopters - 51 - between 2019 and 2020. We know that everyone is struggling right now, and that’s why, we have relaxed some rules of adoption.

Earlier, we used to insist on adoption for at least a quarter of an year, but now we allow for less period depending on the convenience of the adopter.” The curator has a special appeal for visitors during the pandemic. “We still see people who do not wear masks and use sanitisers we have provided on the premises. They talk in close proximity with workers who take care of the animals. They also go close to the animal enclosures. There have been cases in other parts of the world where animals have contracted the virus. We do not want that here. I appeal to everyone to take safety precautions seriously.”

An art show, a cute elephant
Artist Bolgum Nagesh Goud curated an art exhibition of three-dimensional painted elephants, created in fiber-glass medium, by 25 artists last year. The show aimed at creating awareness about elephants and the need to conserve them. The proceeds from the exhibition went towards adopting Seeta, who is the youngest elephant in Hyderabad zoo. “We could collect Rs 3.5 lakh which took care of Seeta for eight months. Seeta is the cutest elephant calf I have seen. Being able to contribute towards her well-being made me happy,” says the artist. Inspired by the encouragement he received, he is organising another exhibition in 2022 with 15 artists which will focus on tortoises. He plans to adopt 10 tortoises with the proceedings, and hopes that Covid-19 will be a thing of the past by that time. 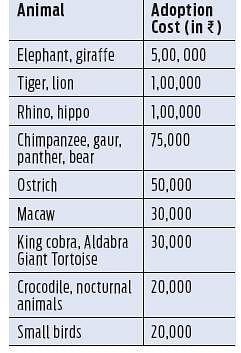 ‘It’s a fulfilling experience’
Prashant Patil and his family, which includes his wife and daughter, are fascinated by tigers. The couple is into wildlife photography and a quick getaway to a tiger sanctuary is their idea of a perfect holiday. That is why, it does not come as a surprise that they chose to adopt Asha, a Royal Bengal Tigress, in June last year. “`1,00,000 was a hefty amount to spare, but this was something that I had wanted to do for a long time. It has been a fulfilling experience to know that I could contribute a bit towards the conservation of this beautiful creature. I paid the amount in two installments,” says Prashant.

The best of birthdays
Chinmay Shah is not new to adopting animals. At the age of five, he and his family adopted a peacock and other birds. On his 12th birthday last year, he adopted a Royal Bengal Tiger cub along with his cousin Havisha Jain. His cousins adopted other animals too.”We think children should learn to appreciate nature and animals to develop empathy and be better human beings. This is the only way to make them sensitive in this world where you are surrounded by gadgets. That is why, we have made it a tradition in our family to adopt animals from the Hyderabad zoo,” shares Chinmay’s father Siddharth Shah. They paid Rs 25,000 towards upkeep of the animal for three months.

‘We adopt an animal every year’
Dr Vasundhara Augamiyha grew up in a family of animal lovers. She opposes the idea of animals being kept in captivity, but acknowledges that zoos can be a great way for human beings to connect to animals. She has been involved with animal organisations over the years, and wants to do her bit for the zoo. “We have a family Trust called ‘Sujay - A Persa, Adla Trust’ that works for various causes. Through this initiative, we adopt one animal every year. Till now, we have adopted five small birds, an Al Dabra Giant Tortoise and other animals,” says Dr Vasundhara, former principal of Sarojini Naidu Vanita Mahavidyalaya. 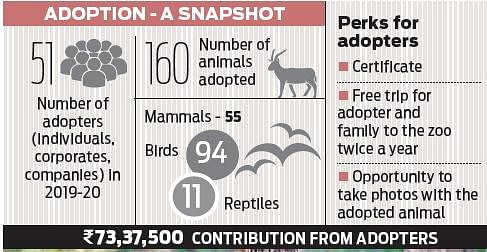 How to adopt
In case you want to adopt an animal, please contact
The curator, Nehru Zoological Park, Bahadurpura.
Phone: 040-24477355
Email: nehruzoopark1@gmail.com