Drinking their way through the pandemic

One of the biggest issues facing today’s youth is alcohol consumption and addiction.

HYDERABAD: It all begins with a casual outing with friends, a tiny sip of alcohol and a harmless drag from a buddy’s cigarette. But when this curiosity turns into addiction, it kills the cat.One of the biggest issues facing today’s youth is alcohol consumption and addiction. And, the pandemic has just made it worse. Deputy Commissioner of Police Vijay Kumar is disappointed with the behaviour of the city’s youngsters. “The country is fighting Covid and here our youth are becoming more and more reckless. They are getting drunk and roaming the streets, they are caught in drunken driving checks,” he says.

Diana Monteiro, a psychiatrist in Secunderabad, says youth are drawn to myths such as drinking large amounts of alcohol once a way or once a week is not harmful, which is not true. “In any case, they can become addicted,”she says. Radhika Acharya attributes the sudden increase in alcohol addiction to the pandemic-induced stress, depression and helplessness resulting out of job insecurity. Addiction can also be influenced by one’s lifestyle, peer pressure and the ease with which drugs are obtained. She says today’s youth are craving dopamine release in their bodies because they are surrounded by negative and depressing events.

Other factors behind this trend is the lack of social gatherings, hobbies and abundant free time. “Although some people are in a toxic trance, they believe that life is uncertain, so let’s enjoy it with the available addictive tools which are alcohol and drugs,”says Geetha Chala, a counsellor. The lack of physical activity causes the brain to crave for a shift and the person gets tempted by certain addictions. Instead of slipping into this addictive pit, she advises young people to start discovering themselves and their interests.But the de-addiction journey has to begin with acknowledging that fact that one is addicted to alcohol and consuming it is an issue. “Taking professional help to curb this habit is important as alcohol is a hard substance which impacts physical health if the consumption is stopped suddenly. Taking the help of family or friends to deal with it will works every time,” says Diana.

Taking up constructive activities to distract oneself from the negativity works. “Doing activities that trigger feel-good stimulants in the body, such as physical workouts, yoga and appreciative work, will help improve mental health,”says Geetha.Blaming the change in culture and lifestyle, the DCP said that the department has assigned special officers to counsel youngsters. Inspector Shyam Sunder of the Cyberabad police is one of them, who counsels those caught in drunken driving checks. “There are two types of young people who are attracted to alcohol: those who drink due to peer pressure and for the sake of having fun, and those who drink because they enjoy the high, which later turns into addiction. The second type drinks to escape reality and considers alcohol to be a stress reliever from depression and insecurities,” he says.

Whatever it is, be it for fun or a stress buster, alcohol is a bad idea. Sunder narrates upsetting real-life experiences to such youth for them to realise that they are on the path of self-destruction. “Youngsters should ditch the mindset that refusing a drink means they are not cool or they are party-poopers. True friends will never abandon you for such silly reasons,”he says.

The World Health Organisation (WHO) says that alcohol consumption is a causal factor in more than 200 disease and injury conditions. Drinking alcohol is associated with a risk of developing health problems such as mental and behavioural disorders, including alcohol dependence, major noncommunicable diseases such as liver cirrhosis, some cancers and cardiovascular diseases, as well as injuries resulting from violence and road clashes and collisions. A significant proportion of the disease burden attributable to alcohol consumption arises from unintentional and intentional injuries, including those due to road traffic crashes, violence, and suicides. 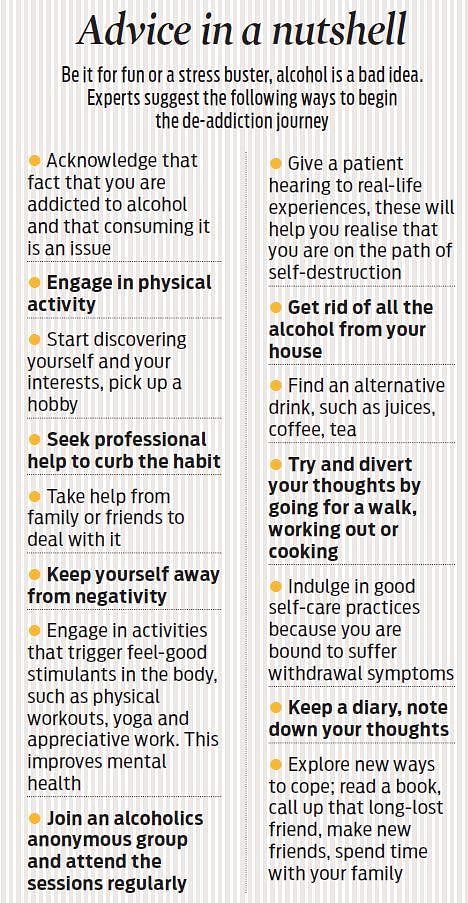 Now we are on Telegram too. Follow us for updates
TAGS
Alcohol addiction Alcohol