Songs on the rocks

As part of the Deccan plateau, the rocks of Hyderabad are said to be older than dinosaurs – dated back to 2.5 billion years ago.

HYDERABAD :  As part of the Deccan plateau, the rocks of Hyderabad are said to be older than dinosaurs – dated back to 2.5 billion years ago. The igneous rocks formed due to major volcanic eruptions. And the patient stonemason that time is, centuries of erosion created several shapes in the stones in areas like Golconda Fort, Durgam Cheruvu, Shamirpet Lake among other places.

These rocks have left an impact on the art and culture of the region that reflects time and again. That’s how as part of the baithak series organised by ‘The Rocks of Hyderabad’ a musical evening titled ‘Geet Gaya Patharon Ne’ is to be held on the evening of February 18. Says Mahnoor Yar Khan, a drama therapist and artist associated with ‘The Rocks of Hyderabad’, 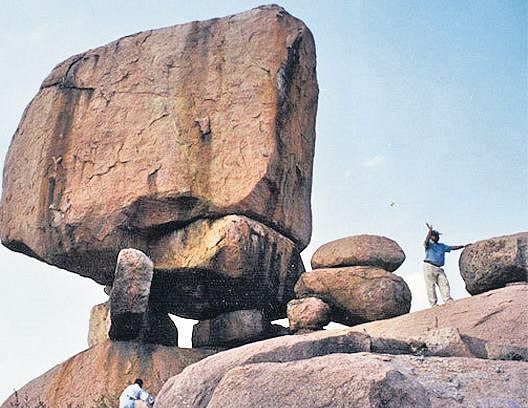 “We are exploring how Hyderabad rocks have influenced art, culture and food and how the changing landscape is changing that.” She adds, “There are several songs on rocks not just on ones that are in Hyderabad but several others as well. It’s going to be immersive, the audience can participate as well.” She further adds, “We are going to organise this every third Thursday of the month.

Then there will be a talk on food. We have Pathar Ka Gosht cooked on stones, Imli Thokku pounded in amal dasta. The use of rock in cooking has been there since ancient times.” Other baithaks will be on folklore, dance, tradition and others. The participating artistes on Feb 18 are – Dr Mahesh Joshi, Harini Rao, Keith D’Rozario, Lady Skavya, Rohit PVNS, and Sriram Mudambi. It’s a virtual session that will be held on Zoom app.