The museum also housed digital albums of The Beetles, AR Rahman and Martha Graham. There was a 50-seat cinema theatre named Soundarya Talkies as well, with an advanced sound system

HYDERABAD :  Celebrated artist the late MF Husain said once in an interview, “Cinema encompasses literature, music and visuals. It is the ultimate medium if used creatively.” The museum ‘Cinema Ghar’ opened by him at Road No. 12, Banjara Hills was a fine example as it housed collections of artworks, books and CDs. Inaugurated in 1999 by the artist’s muse actor Madhuri Dixit, the property is now demolished to make way for a commercial structure.

This brings to an end Husain’s link to Hyderabad, a city where he’d walk barefoot to have a cup of Irani Chai or go for that walk in the Old City. Husain’s family had sold off the property the last year. The collections were shifted to Mumbai in 2011 after he passed away in London.  The walls of the museum had brush strokes by the celebrated artist himself as the art aficionados came over there for a whiff of art. There was a gallery of photographs dedicated to India’s Tinsel Town, featuring Dada Saheb Phalke, Tabu, Madhuri Dixit among other stars. 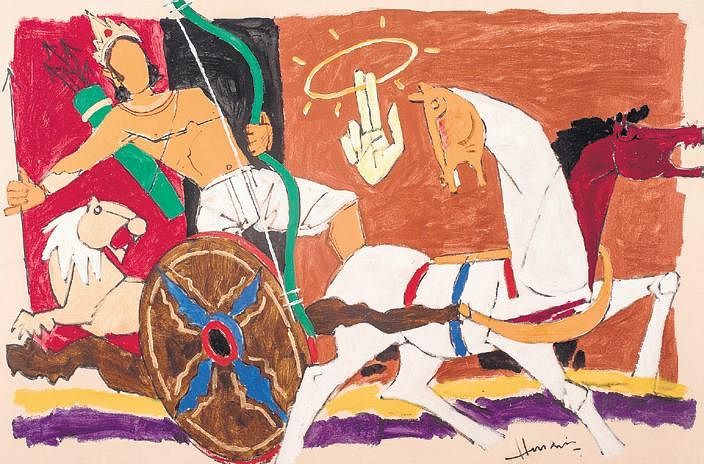 The museum also housed digital albums of The Beetles, AR Rahman and Martha Graham. There was a 50-seat cinema theatre named Soundarya Talkies as well, with an advanced sound system. The library in the building had around 2,000 books on art, cinema, music, dance, science and technology. Says, city-based senior artist Fawad Tamkanat, “I met him several times to see his exhibitions at Cinema Ghar.

He’d also showcase his films in the theatre inside for the invited guests.” He adds, “There was a beautiful 10-feet rock shaped like a human face. It’s sad that this place has been demolished.” Husain directed and wrote the script for the film Gaja Gamini released in 2000. It was his tribute to womanhood and his muse Madhuri Dixit. In 2004, he directed Meenaxi: A Tale of Three Cities, screened in the Marché du film section, Cannes Film Festival.

He was known as one of the leading Modernist artists of the 40s given his cubist style which earned him the sobriquet of being the ‘Picasso of India’. His themes of artworks were wide encompassing different eras, themes and figures. His nude paintings of Hindu deities stirred controversies forcing him to choose self-exile outside the country from 2006 till he breathed his last.

Now we are on Telegram too. Follow us for updates
TAGS
MF Husain Cinema Ghar