Lil champ in the making

Showrya is in the news all over again with his latest achievements, which, incidentally, was a grand double in Kakinada.

HYDERABAD :  Budding 12-year-old Showrya Samala is emerging as the new tennis hope for Telangana and it is not without a reason. The expectations are high but they are not far-fetched, given his proven achievements. A resident of East Maredpally, he is the State’s top-ranked player in his age-group and is at an enviable number five in the national rankings.

Showrya is in the news all over again with his latest achievements, which, incidentally, was a grand double in Kakinada.  And this time it is with a stellar showing in the Under-14 category. He clinched the singles crown to justify his rising stature and also pocketed the doubles title in the recent All India Tennis Championship Series for Under-14 held in Kakinada. 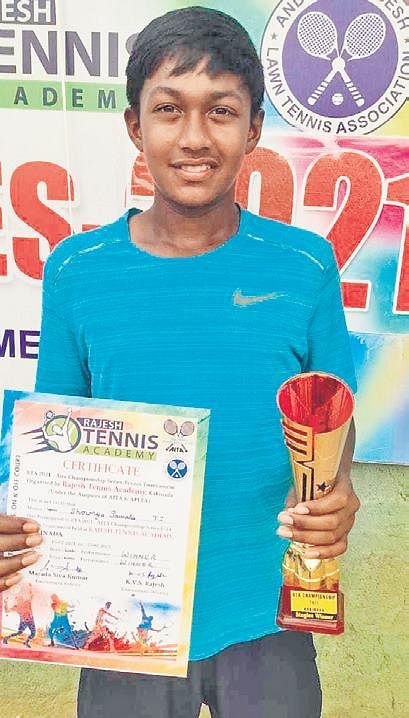 Tennis runs in his veins, so to say. He is coached by his father Ashok Samala, who thrust a racquet in his hands when Showrya was just about five years old in 2013. Taking to the sport full-time, he displayed natural dexterity and by the time he was 10 years old, he was in the top league. He consolidated his position after taking the top ranking in the State Under-12 age-group category.

He has won back-to-back titles in Under-10, Under-12, and Under-14 singles and doubles in 2017, 2018, and 2019. He annexed the Under-12 title at Barcelona in 2017 as a nine-year-old. With adequate encouragement from his father-coach and elders who saw his natural talent, he enrolled for a six-week training stint at the famed Sanchez-Casal Tennis Academy in Barcelona. That gave him sufficient exposure to his peer group’s standards across the globe.

Unlike those in his age-group, Showrya is obsessively passionate about tennis and follows a strict regimen. He says, “Every day I get up by 5.30 am.  I do fitness from 6.30 am to 8 am. After breakfast, I am at the courts from 9 am to 1 pm. After an hour’s lunch break, I study online for one hour and take a nap. From 6 pm to 7.30 pm, I work out at the gym and sleep by 8.30 pm.” The Standard VII student, whose favourite surface is hard court, practices at LB Stadium and at Samala Tennis Academy housed inside ASCI, Khairatabad.

His strengths are a strong backhand play and he serves at a good angle. Showrya’s immediate target is to break into the Under-14 top five and top 10 in Asia Under-14 by the end of the year and try to break into the top eight in the world junior circuit in the next four years to be eligible for ITF Junior Masters.
For one who idolises Roger Federer and Novak Djokovic, the tween also enjoys swimming, skating and basketball. “I aspire to win the Junior Grand Slam by the time I am 16 or 17 and continue to play professionally. Tennis brings happiness to me,” he says of his future goals.

Now we are on Telegram too. Follow us for updates
TAGS
Showrya Samala Telangana tennis