Over 50 per cent Hyderabadis had COVID-19; city inching towards herd immunity

A seroprevalence study found that the prevalence of Covid-19 antibodies was the same, around 54%, among individuals who had suffered prominent symptoms and those who were asymptomatic.

HYDERABAD: More than half of Hyderabad’s one crore population may have been infected with Covid-19 and developed antibodies against the dreaded disease.

A seroprevalence study conducted in the city, for which blood samples were collected from 9,000 people, has detected the presence of antibodies against the novel Coronavirus among 54 per cent of the participants, indicating prior exposure to the virus. 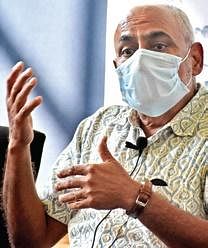 The 9,000 people were selected from 30 out of the 150 divisions of the Greater Hyderabad Municipal Corporation (GHMC), representative of all zones of the civic body. From each of the 30 wards, 300 people aged above 10 years were selected.

The seroprevalence study was a joint effort between the Centre for Cellular and Molecular Biology (CCMB), National Institute of Nutrition (NIN) and Bharat Biotech, the results of which were announced on Thursday. CCMB director Dr Rakesh Mishra said the high prevalence of antibodies suggests that Hyderabad might be slowly moving towards herd immunity, which will be accelerated with the ongoing vaccination drive.

He stressed the need for people to continue following infection-preventive measures such as wearing a mask and also getting vaccinated, amid the threat of new coronavirus variants.

A seroprevalence study found that the prevalence of Covid-19 antibodies was the same, around 54%, among individuals who had suffered prominent symptoms and those who were asymptomatic. 90%, who had tested positive, were found to have the antibodies when the study was conducted in Jan

Now we are on Telegram too. Follow us for updates
TAGS
hyderabad Hyderabad COVID cases COVID 19 Herd immunity