Each year the Swiss pharmaceutical company organises this activity to give the free drug to at least 100 children across the world.

HYDERABAD :  Ayaansh Gupta, who’s two years nine months old and is suffering from spinal muscular atrophy (SMA) isn’t as lucky as 14-month-old baby Fatima of Karnataka who won the most expensive drug Zolgensma worth approx Rs 16 crore through a lottery event held by the drug giant Novartis. Each year the Swiss pharmaceutical company organises this activity to give the free drug to at least 100 children across the world. The drug costs Rs 23 crore out of which Rs 7 crore is for taxes in India. Filmmaker Anurag Basu and cricketer Dinesh Kartik took to their Twitter handles to request people to raise funds for the little boy. As of now, the child’s parents have been able to raise only Rs 3 crore. 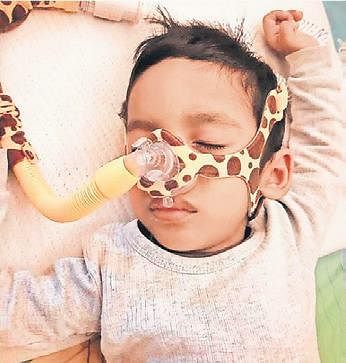 Ayaansh lives with his parents at Nallagandla. Shares Yogesh Gupta, his father, working as an IT professional in Hyderabad, “Spinal Muscular Atrophy is a rare genetic disorder. A particular gene is responsible for communicating the message from the brain to the entire body and in this condition the same gets hampered – the brain and body are fine but the communication doesn’t happen.

Since there’s no movement in the muscles the cells start dying. Doctors say that the disease in progression affects the respiratory system.” Ayaansh is under the medical supervision of Dr Ramesh Konanki, a Pediatric Neurologist, Rainbow Children’s Hospital. “For the Novartis programme, we were the first applicants to apply from Hyderabad but the programme is for kids who are below two years and our son is almost three,” adds Yogesh. Every year more than 2,500 children are born with this rare disease. Not only is the drug that can help any child suffering from SMA is extremely costly, the import taxes alone are close to Rs 7 crore.

Ayaansh was diagnosed with SMA in June 2019. “We tried to reach out to the government and submitted the application to get an appointment with the higher officials and were told that govt won’t be able to help much. The MAUD Minister, KTR Ji retweeted about Ayaansh. But despite that, not many offered us help.” However, the art community in Hyderabad has chipped in yet there’s a huge shortfall of the funds. Says an art practitioner on conditions of anonymity, “Some of us have contributed.

But it’s a huge amount. Hence, a fundraiser has been started on impactguru.com and those who wish to help the little boy can donate via the portal.” Adds Ayaansh’s father, “We had to follow a disease management schedule which includes four to five hours of physiotherapy. We make sure that he doesn’t get infected. If he coughs we have to remove the phlegm with the help of suction and it’s a painful process.”

Future tense?
A PTI report says that during the Zero Hour in the Rajya Sabha on March 17, Congress MP Vivek Tankha mentioned that recently the Prime Minister waived off the tax in the case of five-month-old baby Teera Kamat. The MP suggested that there should be a compulsory tax waiver and removing the tax on the import of the drugs.

A Hyderbad kid is fighting the rare disease Spinal Muscular Atrophy waiting for the world’s costliest drug priced at Rs 16 crore. His parents have started crowd-funding appealing to celebrities and others to chip in with whatever little they can contribute