HYDERABAD: Yasaswi Kondepudi should perhaps give coaching classes on time management. How else would a fulltime MBBS student from Andhra Medical College, Kakinada, also the founder of his own  music band and a keyboard player find time to win a 30-week reality contest while also recording for music composers in Tollywood? “Passion to accomplish all that I can drives me,” says the 25-year-old musical genius. 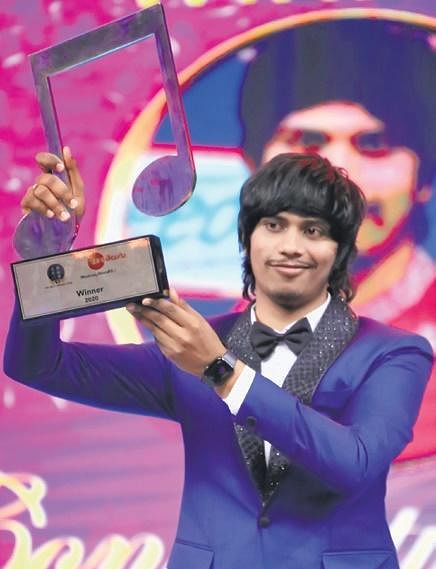 Yasaswi won Sa Re Ga Ma Pa (SRGMP) – The Next Singing Icon in March 2020. For 30 musical weeks, the Telugu audience across the world obsessed over this young medico’s renditions.  Millions tuned-in every week to follow the journey, social media was flooded with conversations and the viewers showered their support making this a unique season of Sa Re Ga Ma Pa. Rana Daggubati presented the much-deserved winning trophy along with `5 lakh prize money to Yasaswi.

When Express called him after the recent win, he said that music runs in his genes. His parents are singers and have their own orchestra in Kakinada. From the time he was in his Class III, he was playing the keyboard for their music. “I was never into singing during my formative years. However, I think playing the keyboard helped me gain swara gnanam. On one occasion when one of the singers could not make it, I was asked to be his replacement. That particular music night was a big hit and everyone appreciated my singing. That’s when I embraced singing fully,” he says. He recalls a life changing event in 2008 when SP Balu was on stage singing and he played the keyboard. Yasaswi says, “Balu garu was surprised that a young boy like me managed to match him in all his tunes.”

Currently, this medico is busy with shows from his music band called YK Concert where they present two-hour musical shows along with his friends and his sister, also a singer. He dreams of becoming a medical officer in a hospital and be able to pursue his music career also. The singer has been busy recording songs for 10 movies including Miles of Love song Gaganamu daati yegarali choodu. “Music is medicine. And medicine is music. I am happy to be able to juggle both these loves of my life,” he says with pride.