Nature is their inspiration

Visual Arts students from Mavelikara have made use of natural materials,including seashells and coconut. Their work has been exhibited in Kochi

KOCHI:  Art defines an artist. Today, the question is not ‘what is art’ rather ‘how art is conceived’. To bring across this message, the post graduate students of Raja Ravi Varma Centre of Excellence for Visual Arts, Mavelikara  have exhibited their paintings and installations at B C Gallery in Mattancherry. The artists have used natural materials such as mud, seeds, sea shells, wheat and coconut shells. The nine artists have explored different themes in the light of post-industrial thinking and changes of cultural attitude by juxtaposing examples with multi-medias.

The exploration of art can be found in the way each artist have portrayed their work. Be it painting abstract images to making a sculpture out of natural material, each work is an imprint of the artist’s imagination and creativity. “Each artist has tried to create the artworks based on their surroundings and the things which they have seen and experienced in their hometowns. Some of installations represent the social problems, mythology while some tell about the harmful effects of the modern technology,” said Jeevan Lal, the curator.

Different varieties of media-painting, sculpture, installation and videos have been used by each artist to portray their work. Vinil, one of the artists, has portrayed the recent issues on farmer suicides has made an installation where newspaper cuttings on farmer suicide had been reported. “I have collected natural materials such as wheat in order to show the crop loss farmers had to face which led to many farmer suicides I am researching on these subjects and all my works are based on these series.”  ]

The exhibition also portrays how the social conditions and the natural habitats have been dealt with in the work. One such type of creativity is seen in the use of new mediums to decayed earthly substances.
Sreejith, likes to work away from the normal norm and this can been seen in his work which is done using decayed bark of trees, lotus stem, seeds and coffee wash. The sustainability of the work is limited but he chooses to experiment with the substances found in nature and there is no artificiality in his installations. 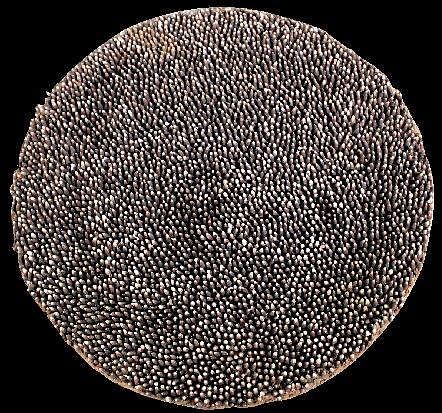 Another artist, Arun Raj from Pathanamthitta,  also experiments with natural elements and has made sculptures on concrete by carving on it. He has used the egg white to polish his installations done on concrete cuts. Fish is a metaphorical imagery in his works.

Ahalya A S, Lenin, Reshma Baby,Viswajith R,  Anuraj and Sanoj have made masterpieces using natural materials. Ahalya has used leaves as her base and drawn paintings of  the temple, folk culture  over it, giving the work a natural look. In the same way, Lenin and Viswajith paintings show the connection between us and the organic substanses.

Reshma, who resides near the sea has created an installation of sea shells using clay. Anuraj and Sanoj have used mediums like clay and charcoal to give a vivid picture of the co-existence of nature and human beings. Anuraj is of the artist’s who likes to work on abstract images. The exhibition is on till December 7.