KOCHI: A review meeting was convened under the leadership of District Collector Muhammed Y Safirulla and MLA Anwar Sadath to discuss the preparations for the Nadathurappu Mahotsavam of Thiruvairanikulam temple to be held from January 1 to 12.The meeting analysed various matters that need to be addressed before the festival begins. Sadath directed the Public Works Department to renovate the major roads leading to the temple. The Collector directed the KSEB and the Kerala Water Authority to ensure sufficient supply of electricity and water during the festival season. 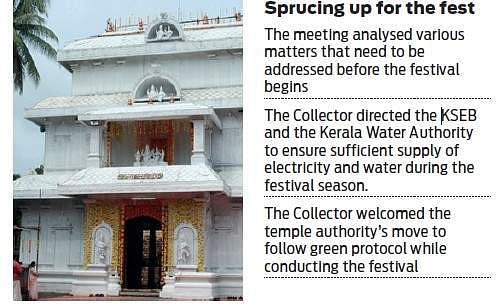 The KSRTC decided to run special services considering the heavy crowd of pilgrims. DYSP G Venu informed that services of a police team led by a Circle Inspector will be made available during the festival. Fire and Rescue Services will be readied to face any emergency situation. Safety of food will be checked by the Food Safety Department.

The Collector welcomed the temple authority’s move to follow green protocol while conducting the festival and said all departments would extend their support in making this happen. A virtual queue model will be implemented for the welfare of pilgrims. Heads of various departments participated in the review meeting, along with Thiruvairanikulam Temple Trust president Akavoorkunjaniyan Namboothiripad, secretary P G Sudhakaran, vice-president N Sreekumar and other trust members.