DMRC, which is implementing Kochi Metro Rail project, aims to finish the stretch between Maharaja’s College and Thykkoodam in 2019

KOCHI: The year 2017 saw the first Metro Rail project in Kerala getting commissioned. Soon after the launch of the stretch between Aluva and Palarivattom in June this year, the Delhi Metro Rail Corporation (DMRC), the implementing agency of the project, completed the extension up to Maharaja’s College by October. Now the target before the Delhi-based agency is to ready the next stretch between Maharaja’s College and Thykkoodam in 2019.

According to a top officer with DMRC, civil work is progressing at a rapid pace under six contractors and another independent one who has been entrusted with the reconstruction of Chambakkara bridge. “Our initial focus is on the completion of works on the five-kilometre stretch between Maharaja’s College and Thykkoodam by 2019. The district administration has given us assurance the land acquisition between Vyttila and Petta will be completed by January. If they can hand over the land by that time, within another 24 months we will be able to complete the stretch until Petta. This will be achieved by 2020. After that, we will initiate the work to extend the project to Tripunithura,” said the officer. 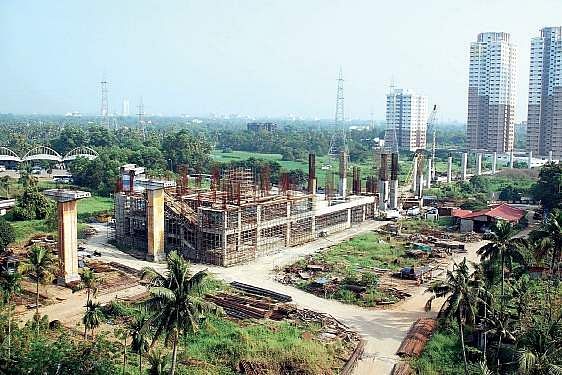 Hurdles
According to a DMRC officer, delay in land acquisition is a major challenge that lies ahead of them. “Our plan is to complete the civil work until Thykkoodam by March 2018. We hope to complete the track laying and remaining procedures needed to make the stretch ready for commissioning by June 2019,” he said.Another challenge is the non-availability of aggregates, like metal and sand. “With the Mining and Geology Department tightening its grip on quarries and imposing stringent rules, the construction sector is facing an acute shortage of rock aggregates. There are only three large-scale suppliers now and lorries are waiting in long queues there. Earlier, we used to get nearly 20 lorries or loads per day. Now it has come down to six. The situation is a serious one. If the issue is not sorted out, it is likely to affect the progress of the civil works. We have been taking stock of the situation for the past two weeks and once we get a clear picture, we will inform the government and the KMRL about the seriousness of the issue,” said the officer.

Balanced cantilever technology
For the first time in Kerala, the balanced cantilever technology is being used for the construction work. The agency has used the technology to construct the span at Ernakulam South RoB where the distance between two metro pillars is more than 90 metres. Here the construction begins at each bridge pier and special formwork is positioned. Once this happens, the cast-in-situ pier segment begins.
The form traveller system is being used here. The cast-in-situ segments of 3m in length is constructed and the formwork is moved in tandem with each segment from both the sides.
The segment construction is continued until it is joined at the centre. This technology will help in completing the work without affecting the traffic below. “This is a point where the Metro Rail takes a 152 m sharp curve. Merging it involves a lot of technicalities, so we have decided to use the technology there,” said the DMRC technical team.

The Chambakkara Bridge
The work to remodel Chambakkara bridge into a four-lane structure had already been launched. The work is being carried out by Marymatha constructions. “We have already launched the work with the available infrastructure. If we wait for the land acquisition to get over, we won’t be able to meet the deadline. A rig has been set up for facilitating construction. Initially, the focus will be on completing the slip road and the remaining works at the fish market side,” said the officer.

Metro fact file
1,200 The number of workers under seven contractors working on Kochi Metro Rail now
2,000 DMRC is planning to increase the labour force to 2,000
3,000 workers during the peak of construction, that is in 2018
350 number of pillars needs to be connected
702 pillars already completed
Nearly 1,200 Pillars needed up to Tripunithura