The Collector told the Central team the district administration is planning to construct a seawall and lay geotextile tube from Munambam to Chellanam.

KOCHI: District Collector K Mohammed Y Safeerulla on Wednesday submitted a detailed report to the Central team on the extent of damage caused by Cyclone Ockhi. According to the report, the district suffered a total loss of Rs 30.155 crore due to the sea surge triggered by the cyclone.

As many as 10 houses and six hutments were completely destroyed in the sea surge while 464 houses were partially damaged. The goverment needs Rs 23.76 crore to compensate the families who lost their homes.
Two deaths were reported in the district and 40 others suffered injuries. Of the nine bodies recovered from the sea five are yet to be identified. Among the 32 persons, who went missing at sea, 30 are natives of Tamil Nadu and two from Assam.

The fishing sector suffered a loss of 3.68 crore. As many as 132 fishing boats were damaged and Rs 3.27 crore is needed for their repair. Fishing gear, including nets, worth Rs 27 lakh were destroyed. A 10 km stretch of road has also been damaged by the sea surge. Sea water entered 25 wells in the coastal area due to the storm surge and Rs 12.50 lakh was spent on cleaning up the wells. The government has provided free rations worth Rs 88 lakh to the affected families, the report said.

The Collector told the Central team the district administration is planning to construct a seawall and lay geotextile tube from Munambam to Chellanam and the estimated cost of the work is Rs 85.94 crore.
The geotextile tube will be laid at Velankanni Church, Companypady, Cheriyakadavu and Vachackal areas in Chellanam to reduce the impact of the sea surge.

Geotextile bags will be laid  upto a distance of 110 m at Puthenthodu Fishing Gap while a  seawall will be constructed at Kandakadavu. The report also recommends protection of the  seawall at Edavanakadu Aniyil, Chathangadu and Pazhangadu in Vypeen, Veliyathamparambu at Nayarambalam, areas near ICAR, Chappa at Elankunnapuzha panchayat and construction of seawall at various places in Vypeen facing sea erosion. 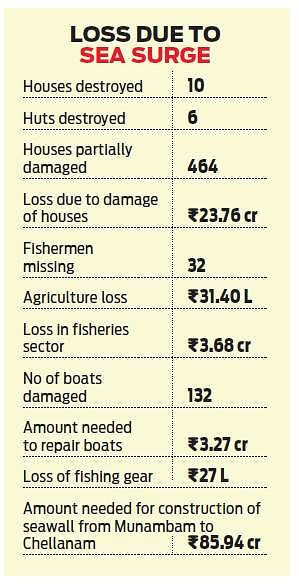 Now we are on Telegram too. Follow us for updates
TAGS
Ernakulam Cyclone Ockhi