An ode to survival

KOCHI:  Anjan Sathish’s status on Facebook reads, “I may not speak like you, hear like you and move like you, but I want to do things like you.” This  may raise a few curious eyebrows but for those who know Anjan, it is a declaration of  courage and grit.

Anjan, who suffers from cerebral palsy, is a brilliant 3D animation artist. A faculty member at the Adarsh Special School in Tripunithura, he is working on a project for 3D graphics and animation in human anatomy. He is also an avid blogger.

Thanks to his artistic talent, Anjan is also a member of the Kerala Cartoon Academy. He is known for his sarcastic sketches on political figures.

His journey
The 30-year-old, however says he never had it easy. Born to the Ernakulam-based Sathish and Lathika, Anjan discovered his talent for art at a very young age. He even went on to bag the Amritha Keerti Puraskaram at the age of eight. Though his parents were devastated to realise their son had physical disabilities, they strove to give him a normal childhood. His mother even took a five-year vacation from her work to look after him. 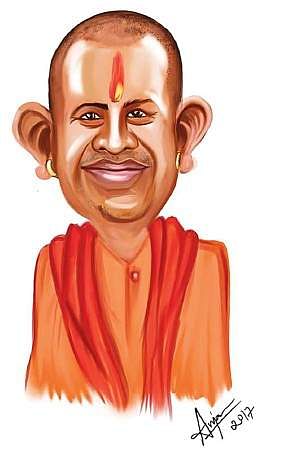 Anjan was given regular physiotherapy sessions and lip-reading classes at the Mukundan Memorial Speech and Hearing Centre.
When it was time to admit him to a school, however, many of them were not willing to admit him. Thankfully, though, the LP school at Tripunithara enrolled Anjan.

With his parents and teachers backing him up, the artist in him blossomed. Some time ago, he had presented his work to former president A P J Abdul Kalam and sound designer Resul Pookutty. His other achievments include the Rotary International Special Talent award, a medal in art at the national Abylimpics, Chennai, and being the first artist to hold an exhibition inside the Kerala High Court.