KOCHI: With the monsoon intensifying, hospitals in the district are witnessing a spurt in viral fever cases. However, there is no reason for worry, said health authorities as pre-monsoon preventive measures had been adopted to contain the spread of communicable diseases compared to the previous year.

District Medical Officer Dr N K Kuttappan told Express no outbreak of diseases, except for viral fever, was reported this season. “Several measures have been taken to prevent the breeding of mosquito larva in water bodies,” he said.

“This has prevented the outbreak of communicable diseases. We ran a cleanliness campaign and measures were adopted to prevent waterlogging. This helped in keeping diseases at bay to a certain extent,” the officer said. 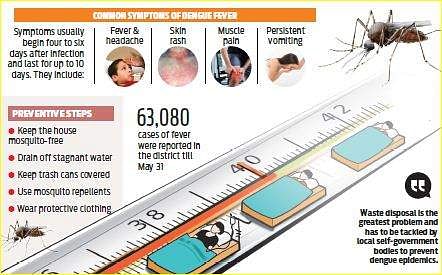 Ernakulam General Hospital RMO Dr Cyriac P J said viral fever patients were thronging government hospitals since the beginning of the rains. Around 2,000-2,500 cases are reported every day, he said.

“People come here with viral fever. Around 25 dengue cases were reported this month. The patients coming with viral fever are prescribed medicines and a week’s rest. We also check the platelet level to detect dengue. Attempts are on to control waterborne diseases,” the RMO said.

However, authorities are worried over the dearth of physicians. The General Hospital is the worst affected.

“There are only two physicians in place of six,”  General Hospital superintendent Dr G Manoj said.
Till May 31, as many as 63,080 cases of fever were reported in the district. The number of cases was higher compared to last year. There were 94 confirmed cases of dengue till May end.

Authorities are also concerned about the number of H1N1 cases reported before the onset of monsoon. This year, 113 H1N1 cases and four fatalities were reported till May 31 while there were no such cases last year. Similarly, 81 hepatitis cases and one death have been reported this year. As many as 34 malaria cases were recorded this year in the district. Except two, the rest are migrant workers. The number of rat fever cases rose to 47 from 19 last year.

● Participate in mosquito eradication efforts
● Clean clogged roof gutters, particularly if the leaves from surrounding trees have a tendency to plug up the drains.
● Aerate ornamental pools or stock them with fish. Water gardens are fashionable but become major mosquito producers if they are allowed to stagnate
● Keep drains, ditches and culverts free of grass clippings, weeds and trash so water will drain properly.