From here to eternity

Kochi Express brings to its readers the eventful journey that Kochi Metro made, right from its inception to commissioning, through the reports that were published in it and also TNIE

He made the announcement at the grand ceremony held in connection with the launch of the construction of the project at Jawaharlal Nehru International Stadium on June 7, 2013. The announcement brought the spotlight on Kochi. 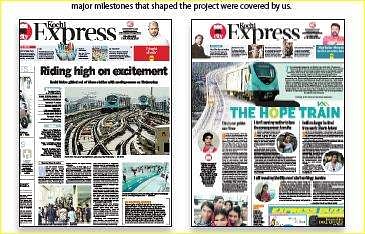 Though the deadline got extended and it took a year more, 1,460 days to be precise, Kochi Metro Rail still succeeded in becoming the quickest and longest first stretch to be commissioned.

When Prime Minister Narendra Modi inaugurates the Aluva-Palarivattam stretch on Saturday, Kochi Express takes a journey back, looking into some of the major reports published by us.