Getting the satvik khana to your doorstep

KOCHI: When Deepika’s phone started ringing at an early hour, she was alarmed. Hesitantly she picked up, only to be pleasantly surprised by one of her elderly customers.

“He was a Jain from Chennai and he called me Annapoorna as I was preparing special satvik meals for him without onion and garlic,” says the city-based home-cook whose authentic North Indian fare has a huge fan following.

Be it lasooni paneer, baigan bharta or green chilli paratha, she ensures a burst of taste and authenticity. Come up with any typical North Indian vegetarian delicacy, and Deepika will deliver it at your doorsteps. “I keep adding to the menu and as of now cheesy potato paratha is a hot favourite with my customers,” she says. Deepika, who relocated to the city from Kanupur, says she started cooking for her North Indian friends practising in Medical College. 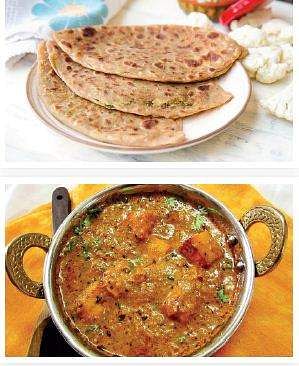 “They were missing ‘ghar ka khana’ and asked me to cook for them on a daily basis. That was some two years back and now the number of my customers has grown in leaps and bounds,” she smiles.

Her facebook page Leela’s Kitchen is a talk among the foodie groups in the city as you don’t have to order much in advance. “All I need is one hour. I have two helpers who do the peeling and chopping. We are always prepared to take the order and finish it in an hour,” she says.

Deepika says though she is an expert cook now, once she hardly had any idea about what happens inside the kitchen. “It was my mother-in-law Leela who taught me the art, with all its nuances and tricks. She had magic in her hands and hence my page is named after her.”

There are many specialty restaurants in the city dedicated to North Indian cuisine, but Deepika says their preparations lack that authentic taste and flavour. “You don’t get a paratha with a thick methi filling there. While we use atta they use maida, and there is always the hygiene part. From the flour to garnish, we make sure that everything is 100 per cent North Indian.”

Then there are customers who want specific food, something in sync with their health or religion. “I think there is no other eatery in the city that provides Jain food,” she adds.

But it’s not just homesick North Indians who place orders at Leela’s Kitchen. “I get equal or more orders from Keralites. I think yummy home-cooked food is something that appeals to all,” she winds up.