Olwen Bourkes, a UK-based gown designer, is working with the wives of fishermen in Mattanchery to recreate a desi touch to her gowns

KOCHI: In 2015, Olwen Bourkes, a UK-based fashion designer chanced upon an embroidery store in Jew Town, Mattanchery. Intrigued by the intricately-designed handkerchiefs that were put on display, she stepped in to ask the owner, Thomas, about the people who designed the laces. Thomas took Olwen to the homes of the women, who created the work. 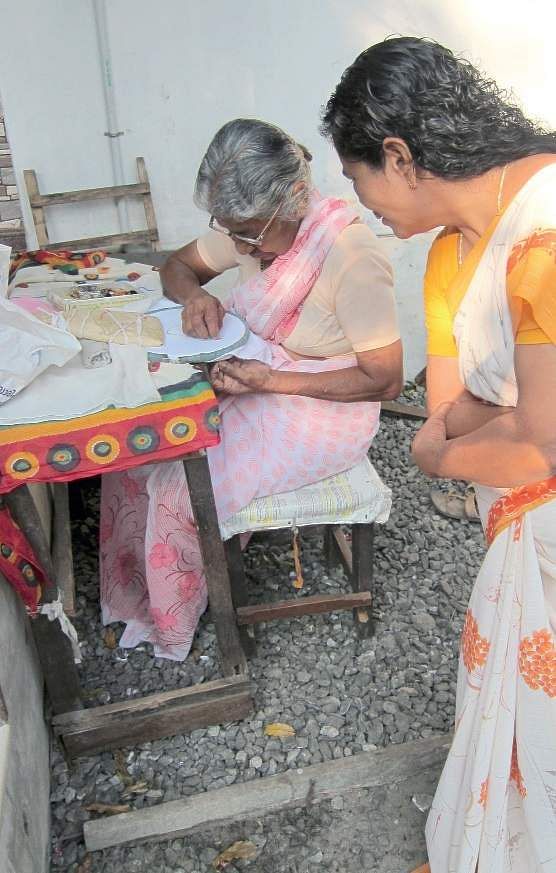 “The women were doing a style called ‘shadow’ embroidery, where the stitches are made on one side of a sheer fabric, so the colours can show through on the other side. It’s very beautiful and delicate and unlike anything I’ve seen elsewhere, which is why I decided to make use of their expertise to create a new design for my wedding gowns,” says Olwen, who was in Kochi recently.
According to her, colour-decked gowns are a rarity in countries, like the UK, where white gowns remains the No. 1 choice for weddings.
“I am specialising in bespoke gowns, which are custom-made for brides. Each gown has to be unique by itself, which is why I decided to use the expertise of these women from Mattanchery. It will help in bringing a lot of colour to the gowns,” says Olwen.
The women are all wives of fishermen and have a wealth of experience in emboidery, thanks to lessons given to them by nuns who lived in the Eda Kochi convents.

“The embroidered dresses, designed, with the help of the women, will be sold in boutiques in the UK and Ireland. The work is currently in progress. It will take them some time to complete my designs, as they are quite intricate and all the work has to be done by hand. Once they have embroidered the silk, I will make the dresses at my studio in London, and launch the range,” says Olwen.
Olwen is quick to add that this will add a desi touch to her gowns. “This is a lovely way of using the skills of the local Indian community and deliver it to the British and Irish markets. The fact that the work is done by women from their homes adds a personal touch. It will make the dresses more special than a machine or factory-produced garment,” she added.
Olwen studied fashion design at the National College of Art and Design in Dublin, and then moved to London where she worked as a couture dance dress designer for a TV show ‘Strictly Come Dancing’, after which she worked on ballet costumes for the Royal Opera House.
She set up her own fashion label in 2012, specialising in bespoke gowns.