KOCHI:Tuesday was a solemn day for the students of MET Public School. The two peepul trees, which had served as their shade and delight during days of scorching heat, were given its final rites. Under the remains of the now dead trees, the children sang in unison,Gandhiji’s favourite the bhajan, ‘Raghupathi Ragava Raja Ram’, and laid flowers in homage to the trees. 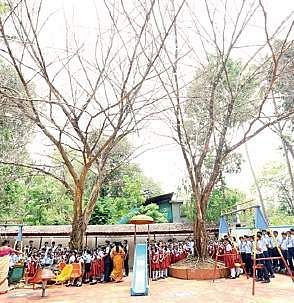 “These trees were planted by former students  and ever since then they were nurtured by the students and staff alike. A few months ago, however, the leaves started falling. We thought they would grow back but the roots and the trunk started shrivelling. It was very distressing to watch a part of Mother Nature die such a death,” said Indira Rajan, director of the school, who performed the final rites. There were tears in the children’s eyes as they bid adieu to the trees.“We have called the social forestry department which will cut down the trees,” she added.

Allegations
However, there are accusations that the trees did not die naturally. “The trees were healthy. Also, it is suspicious that both of them started shrivelling together. We have raised this issue before the Social Forestry department. We suspect some human action in the death of the trees,” alleged the school authorities. Meanwhile, the students planted 10 saplings in lieu of these trees. “This is [former Indian President] A P J Abdul Kalam’s dream. The students took the pledge,” said Indira. A tree planted by A P J Abdul Kalam stands next to the trees which had died.