KOCHI: An albatross in flight, a colony of  penguins, massive glaciers and elusive whales. But nothing beats the enigma of an overcast sky opening up and turning everything into molten gold - icebergs burning like red-hot embers in an eerie stream of sunlight. Balan Madhavan calls the experience ‘ethereal’ as he shows slide after slide of the terrain, resplendent in unimaginable shades of amber. The lensman says Antarctica was part of his bucket list for long, and his maiden photography expedition to the cold continent was nothing short of magical. “It was amazing to watch huge ice walls all around, towering mountains of white,” he says. Balan’s photo documentation is not full of conventional frames, but artistic vignettes - stunning formations, abstract patterns and miraculous splashes of colour on a whiter-than-white canvas. “Winds and currents concoct all these amazing forms and shapes. But I really have no explanation about the deep indigo pool in the middle of a large piece of ice,” he says.
Balan, along with his fellow travellers, reached the Antarctica waters through Drake’s Passage, world’s roughest sea route where waves and winds are most unpredictable. “I shot the first bird of my trip there - an albatross, the bird with the widest wing span. They just wander over the ocean for days,” he says. There were a lot of technical challenges - cameras hanging, batteries draining and hard-discs dying in the extreme weather. “But we managed all that with proper backup,” he adds.

There are photographs showing the contrast in scale between massive ships and arctic icebergs. “In front of the large mass of ice, an eight-storied ship is nothing. Then there are colossal ice waves that look as if they were frozen halfway from hitting the land.” He says best part about Antarctica for a photographer is the clarity of vision. “There is  absolutely no humidity and pollution. It opens up the whole horizon and the vista is just mind-blowing. At the same time it’s all the more challenging as white reflects light back to the camera.” 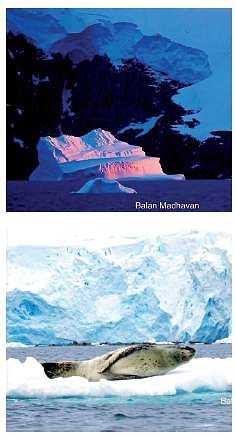 A short trek after Half Moon Island, a pebble beach, they came across the first colony of chinstrap penguins. “There is nothing touristy about the place and you are not allowed to take anything including drinking water once you step out of the ship. It’s just rocky mountains jetting out of the water,” he says. Deception Island, in fact a volcano, has some man-made structures, an oddity in the continent. “During the beginning of the 20th century Antarctica was the place for whaling. And, though in ruins, the infrastructure they made for it is still there,” says Balan.

Getting penguin pictures was another challenge as the cute arctic bird is totally unconcerned about human presence. “They are funny creatures that keep moving all the time. It’s not easy to get a good isolated photograph in the middle of thousands of birds. At times you will see leopard seals that prey on the bird a few feet from them. They attack penguins only in water” says Balan as he shows various penguin pictures. The tail splashes of whales are captured in their vivid detail, but Balan says unless you are an underwater photographer, you can’t shoot a full whale. “What you get normally is its tail lift or head lift, or a very rare jump called breaching.”

Receding glaciers, something that he witnessed during his visit, is not a happy scenario, he adds. “It shows the ice melting into the ocean and reducing its temperature. It’s a process that mars the balance of the environment and it’s the result of what we are doing to nature,” he winds up.