Cartoonist Unnikrishnan’s ‘Kannirukki Kalam’ is a compilation of issues and affairs- both political and social.

KOCHI: Cartoonist Unnikrishnan’s ‘Kannirukki Kalam’ is a compilation of issues and affairs- both political and social. The artist who exhibited 60 cartoons- in English and Malayalam, at the Durbar Hall recently, says that he decided to showcase his work on Kerala Piravi, tracing the brief history of changes that shaped Kerala over the years.

He has portrayed different areas such as society, lifestyle, relationships, environment, literature, politics, religion, beliefs, over the last six decades.The works have been displayed in 10 states across the country from November 1. “Some of the exhibitions are ongoing. Some like in Kerala has ended in three days time. I wanted the public in other states to get a feel of the formation of our state,” he said.

The artist says the comic strips, though humourous is meant to be thought-provoking. Exhibition of the same cartoons with English subtitles was held concurrent with Kerala Formation day, organised by All India Malayalee Associations in places such as Chennai, Bengaluru, Kolkatha, Ludhiyana, Bhuvaneswar, Goa, Thane and Delhi. Without loosing the essence of the pictures, cartoonist T V G Menon translated the subtitles. 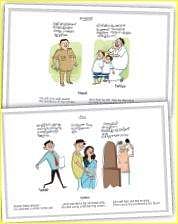 In Delhi, poet Sachidanandhan inaugurated the function.”The exhibition is astonishing in the way it contrasted the past and presentlife of Kerala. The sight on cartoons evoked in us that change has this much invaded our life. The event is evoking a rememberance of the transformation in one’s life style,” said Lenin P N, a cartoon enthusiast.