Researchers in Cusat have succeeded in developing three 2D materials in a row.

KOCHI: Researchers in Cusat have succeeded in developing three 2D materials in a row. The research, carried out in collaboration with the researchers in Rice and Houston universities, resulted in the development of 2D hematene, ilmenene and manganese telluride. According to M R Anantharaman, BSR faulty and head of the  Physics Department, Cusat, all the three materials differ greatly in quality compared to other 2D materials. 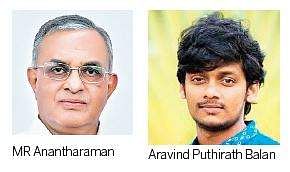 "Hence, a lot of hope hinges on their usefulness," he said. The international team of scientists was led by Anantharaman and his PhD student Aravind Puthirath Balan."These materials have a lot of applications like solar fuel generation. These findings are a major landmark in the realm of nanomaterials. Hematene, a three atom -thick 2D material, was derived from hematite, which is the iron ore. Ilmenene was derived from Ilmenite which is abundantly available in the coasts of Kerala. While hydrogen, an eco-friendly fuel is produced by splitting water using electricity, both hematene and ilmenene are photo-catalysts capable of splitting water without using current," he said.

2D manganese telluride is yet another non-layered material which has been developed by the duo. In addition to the photo-catalytic property enabling their use in splitting water into oxygen and hydrogen, their ferromagnetic quality will lead to the development of miniaturised sensors and computer memory hardware. According to Aravind, the high point in the extraction of-layered 2D materials is novel and is classified as non Van der Waals solids.  "The discovery of these new 2D materials will augur well for further discoveries and make devices for future applications in the area of green energy," he said.

"Besides, these pathbreaking findings have opened up new areas of studies and research. These discoveries have been published in Nature Nano-technology, Chemistry of Materials of American Chemical Society and ACS Applied Nanomaterials journals," said Anantharaman.

Pulickal M Ajayan of Rice University, Chandrasekhar Tiwari, currently in IIT Kharagpur, Sruthi Radhakrishnan of Intel Corporation, Portland, USA and Oommen Varghese from University of Houston are the other members of the team.