Members of Firefly, the band, are reuniting. This time they’ll be playing rock hits of  yesteryear

KOCHI: It’s dark. In the distance is a glow of light. As you walk towards the source, there’s a peal of thunder and a flash of lightning. And then the rain falls. Soaked to the skin, you step into the room. No, what you felt weren’t the forces of Nature. The reunited fireflies were practising.Fireflies? Reuniting? Practising? Fireflies are soft-bodied beetles related to the glow worm, emitting a phosphorescent light. Search every nook and cranny during the day, chances are you may never find them. Fireflies come out at night.Firefly the band is no different. The members of the band are engaged in various professions during the day. And, at the fall of twilight, the decibels soar.

’It’s been quite a while since we performed. We are regrouping,’’ says Sriram, ace drummer and the founder of the band from Tripunithura. ‘’We were the ‘Melting Maids’ when we started out in 1985 as a heavy metal band. Heavy metal was very much in vogue then. Our model was the Iron Maiden.’’
‘’For five long years, the mood remained. Then, dissolution set in,’’ Sriram says. ‘’We felt we were compartmentalising ourselves by playing only for a niche crowd. Our fans were those twenty-somethings who were seriously into heavy metal music. We wanted to break free and play for ordinary folks.’’ 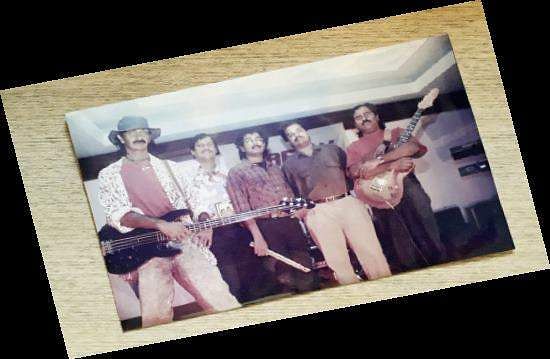 ‘’So we took a break,’’ says Jayen Varma, the band’s guitarist with a classical touch (a drummer who plays the mridangam with aplomb but realised his future lay in bass guitar). ‘’We escaped to the cool climes of Munnar. While there, we were caught in a swarm of fireflies. It was a spectacular show with hundreds of fireflies flitting about. An idea struck us. Melting Maids became Firefly.’’

Firefly has finely blended Indian classical music with the hip-hop rhythms of the west to create a subtle tapestry of both styles. They also performed rock, blues, country, jazz, reggae, disco, techno, rap and even Hindi pop songs. ‘’We were, at times, in a lighter vein, referred to as a ‘cocktail band’ as we played a wide variety of music,’’ says Jayen.

‘’ Somewhere along the line ennui set in,’’ says Sriram. ‘’Suddenly, everyone is into fusion music -  ranging from the subtle to the bizarre. We decided to opt out.  There is no point in doing what everyone else is doing. We took a sabbatical,’’ he says.That sabbatical is now over. The band is reuniting. So, what’s in the kitty? ‘’Covers. Plenty of covers.....,’’ says Sriram. Covers? ‘’Yep. We’re going to do covers of select hits of yesteryear. We’re going to resurrect the rock bands and their smash hits. We’re going to play the classic rock songs people love. Age cannot wither them nor custom stale their infinite variety,’’ he says.

Sriram and Jayen are the lifelines of the group. The others are: Collin D’Souza (vocals), Sasikumar (keyboards) and Vichoo Iyer (lead guitar). So, what does it feel like to reunite and be in the limelight once again? ‘’I began my bass guitar journey with Firefly and am happy to be back in the band to revive it. Playing bass in Firefly was like learning practical lessons of music in a school. It helped me a lot in my collaborations with other musicians in andoutside India,’’ says Jayen. ‘’I started my drumming career in 1984. I’m really happy we are reuniting under the banner ‘Firefly’ and looking forward to giving our avid fans the very best,’’ says Sriram.

‘’We began with heavy metal songs in the early 1980s. Later, we decided to cover other genres too like blues, rock, rock ‘n’ roll, funk, country etc. Slowly, we got into the fusion genre,’’ says lead guitarist Vichoo Iyer. ‘’But our hearts lay in the classic rock songs. What was a dormant desire has now erupted. We feel there is nothing like the oldies.  They give a wonderful feeling. Neil Young sang ‘Rock ‘n’ roll can never die’. When we play the old songs now, we get the feeling that rock ‘n’ roll is still alive and kicking...’’ he says. Is there a playlist? ‘’Yep. It’s a long one. Tracks fans will die for,’’ says Sriram.
‘’There are slow songs as well as mid-tempo ones: ‘Imagine,’ ‘Wonderful tonight,’ ‘Hello,’ ‘I shot the sheriff,’ ‘Buffalo soldier,’ ‘Hotel California,’ ‘Every breath you take,’  ‘Sultans of Swing,’ ‘Cocaine,’ ‘Walk of life,’ ‘Black magic woman,’ ‘Summer of 69.’ ‘Comfortably Numb,’ ‘Rhinestone cowboy,’’.....the list is endless,’’ he says.

‘’We did the unthinkable way back in the Eighties. A band from the royal temple town of Tripunithura playing rock/metal songs. I’ve always had a dream the band will perform again. I used to discuss this dream with the other members and, thanks to our keyboard player Sasikumar, the dream has come true. We are all looking forward to the reunion show on Saturday,’’ says Vichu.‘’The thought of a reunion cropped up in the midst of a conversation with Rajesh of Riverbourne Centre, Tripunithura, where we will be performing,’’ says Sasikumar,  The first face that came to my mind was our dear friend, the late Vasudevan (Sriram’s brother) who had all along pushed for a grand reunion. This reunion was his dream. I dedicate this show to him,’’ he says.The band will play ‘the classic rock songs you love’ at the LMN Restaurant, River Bourne Centre from 7 pm on Saturday.