Survivors of the Maharaja College attack: One in ICU, other stable

While Arjun, 19 is fighting for his life in an ICU, Vineeth is unable to shake off the memories of the night. They underwent treatment at the Ernakulam General Hospital.

KOCHI: Arjun and Vineeth, the survivors of the deadly attack at the Maharaja’s College campus that killed 20-year-old Abhimanyu’s, are still struggling to shake off the effects of the horror-filled night.
While Arjun is fighting for his life in an ICU, Vineeth is unable to shake off the memories of the night.
Arjun, 19, a graduate student of Philosophy and an SFI member, suffered severe injuries to his liver and is currently admitted to a private hospital in the city. As his condition is stable, the ventilator support has been removed, said hospital authorities. 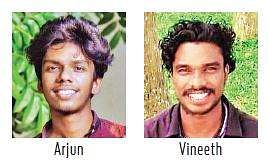 “He is conscious and oriented. But the injury to his liver is severe and his condition may worsen any time. So we have kept him under observation. He underwent an immediate surgery when he was brought to the hospital in the early hours of Monday,” hospital PRO told Express.  The son of a middle-class family from Kottarakkara, Arjun has a younger sister who is still in school. His father works in Hyderabad and his mother is a teacher.

Vineeth, an MA Economics student and a native of Palluruthy, also sustained stab injuries. He underwent treatment at the Ernakulam General Hospital. Though he is out of the hospital, the terror of the night is yet to leave him.

“We did not get a hostel room last year. The old hostel and the union office were practically our bedrooms. He was in front of all the protests and activities,” remembered Arun.
Arun, a resident of Kanjikkuzhi in Idukki, was very close to Abhimanyu.

“We came to the campus when we got the news that the hostel was under attack. We reached road behind the campus.

He was gone before we could get him to a doctor’s care,” Arun said.

Now we are on Telegram too. Follow us for updates
TAGS
Maharaja’s College Abhimanyu Survivors Campus Politics SFI leader