“When I shed a drop of tear
soaked in compassion for others
a thousand universes drawn in my heart
When I spend a smile from my lips
wetted with my love for others
the gentle, ever pure moonlight fills my heart.
I knew not till date
of this divine rapturous enlightened flow
thinking again and again of this knowledge denied
shattered in mind, I weep.”

- wrote Akkitham in ‘Irupatham Noottandinte Ithihasam’ (Epic of the 20th Century), a poetic masterpiece that has been termed as one of the first works that heralded modernism in Malayalam poetry.
Akkitham Achuthan Namboodiri, the philosopher-poet believes in the ultimate power of love. He advocates for a universal love towards everything that exists in Nature, a sort of leitmotif that resonates all throughout his poetic creations. 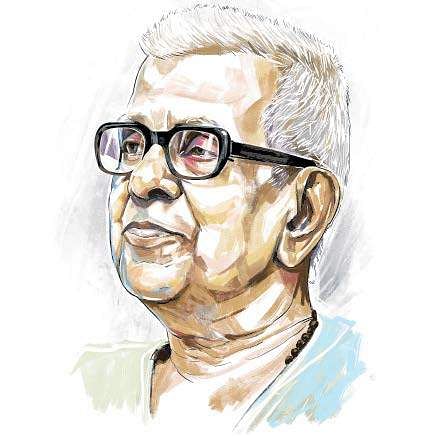 Undoubtedly Malayalam’s very own poet, the nonagenarian’s well-known works were recently translated into English by bilingual writer and poet P K N Panicker and published as ‘Selected Poems of Akkitham - from God’s Own Country’.

Brought out by Authors Press, the book, while seeking to shed light on the poetic life and works of one of the greatest poets in Malayalam, is also part of an ongoing effort by the translator to ensure that “Malayalam writers, their writings, their perception of world events and the Kerala culture is accessible to the world to study and appreciate.”

This rare collection subtly serves to portray a poet whose avowed ideals and poetic musings have been misunderstood many a time. Once an active advocate of various social reforms, Akkitham was also conscious of the underlying fact that - to quote Panicker - “his vision was not born out of any political philosophy or class war, but the result of deep-rooted learnings from his childhood.” This was what spurred Akitham on to look at life and society from an altogether different perspective from that of his peers.

Maybe that is why Akkitham, while elaborating on his own poetry, once said, “Happiness is merely a process of erasing sadness. There is only one remedy for pain and sadness - and that remedy is Love.”
In one of his poems ‘Science’ rendered on an anecdotal note, we are casually thrown into the company of a seemingly superstitious gentleman who is accosted by one with an avowed scientific bent of mind, only to have the tables subtly turned on him. Originally titled ‘Sasthram’ from the 1991-released Sparsamanikal, the poem revolves around an incident in the life of the world-renowned scientist Louis Pasteur.

In his long and fruitful life, the 92-year-old has penned hundreds of poems in addition to bringing out a collection of short stories, essays and plays.

Akkitham is one who believes in the coexistence of the physical and the metaphysical in a seamless web woven by the universe itself. Rather than attempting to arrive at a scientific backing of all that is there to comprehend, he is one who accepts the truth for what it is. Such an utter lack of scepticism is what makes it difficult for a section of readers and critics to slot him into any one particular category.

Like his close associate Jeevan Kottavattam points out, “Akkitham has lived and still lives as a true Gandhian, wearing Khadi and not being ashamed of it. He is the vanishing Indian tribe who recollects the pathos of the freedom movement of the nation. Gandhian, yes. But he is also entrenched in the culture of this country. Thus even at this ripe old age of ninety, he involves himself with the organisation of Yajnas.” A living poetical paradox indeed, far ahead of his times. 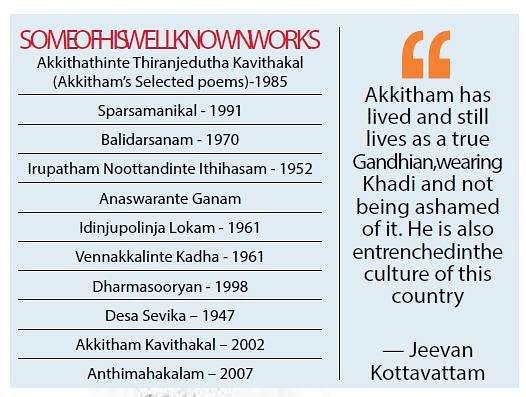