Once a mother’s popular pickled masala recipe to accompany any dish on the family’s dinner table, Somey’s Kitchen has come a long way to become a full-fledged food startup in Bengaluru

KOCHI: Every time Somey Samuel visited her daughter Sandy Samuel Jerome in the UK, she would take along with her several packs of masalas, just like other Indians travelling overseas. But Somey’s homemade masalas were often the point of conversation among Sandy’s friends. That is when Sandy thought it might be a business opportunity in the making. “My mum would bring her pickled masalas to the UK, which we have with seafood, dal rice, curry, potatoes and non- vegetarian cuisine. It would last us six months. Our British friends and other relatives would love her chicken and prawn masalas too,” says Sandy, a former media professional, who was always keen to start a venture with her husband, Joel Jerome. “But we were waiting for a unique idea, and this we thought was something that would click,” she adds.

At the end of 2015, Joel quit his job as a sales director, putting their savings into Somey’s Kitchen, the USP for which is preservative-free products, which are home-made and suitable for kids as well. But just like all startups, the hiccups started right from the beginning. The launch did not go as expected, and the company with only the two of them had a slow start. “We received the basic certification, licenses and understood the market.  We did everything, right from cooking, storing, packaging and marketing. We often worked until 1 am all nights,” recalls Sandy, the CEO and co-founder of the company. 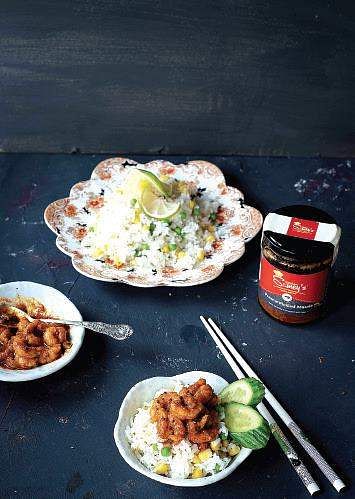 They began selling pickled masalas and added gluten-free rotis, pooris and organic range of ready to eat food. The company has tied up with large retail chains and is working on going online soon. Soon, their products started becoming visible among online stores in London and other local Asian retailers.

Even so, within 10 months, they started running out of funds. At that point, Joel thought it wise to go back to corporate life, even if this meant juggling between two jobs. Things started looking brighter when they were invited to be part of a television programme where they were asked to share their journey as entrepreneurs. It gave them a shot in the arm and they decided to bring the business home.

In December 2016, they visited Bengaluru for a month to establish the business here. This meant selling their property to set-up a factory in Doddaballapur, Brookefield. “Property prices are lower here. And we noticed that people in the city were open to having ready-to-eat food. We got a good response from large retailers and customers that we tied up with,” she says.

However, she is quick to add that none of this was a cake walk. “People look at us from the outside and think it’s all so easy. Only we know the challenges we faced in setting up a team and factory here. We have two kids and were working through the day, coordinating with the team from UK,” she says about the business, which started with just two employees and now has 38 of them working round-the-clock.
While Sandy handles the marketing and communications for the startup, Joel handles the production, packaging and finances.

Somey looks into quality control, visits the factory and co-ordinates with her daughter abroad. Sandy found the Indian startup ecosystem to be “male dominant”, which meant that dealers were more responsive to “my husband than me.” “It’s a male-dominated society, so people were more responsive to my husband while dealing with finance and other hands-on work,” she says.

She added that they were supposed to have the factory machinery up and running by September 2017, but managed to only this JanuaryBut now that they feel they have a “decent customer response”, they are going to start approaching investors next year.  While they have already expanded to Pune and Mumbai, they are also working on making it to the online space, after which they plan on exporting their products to the UK.

Their Journey
Using a slice of their life and their life’s savings, Sandy and Joel started Somey’s Kitchen in the UK
Their USP is preservative-free products, which are home-made and suitable for kids
After a fateful appearance in a TV show, they decided to bring the business home to Bengaluru from the UK. The business which started with just two members now has 38 employees
They have already expanded to Pune and Mumbai and plan on exporting to the UK