Weaving in a new future post-floods

With 15 of the 99 looms back in working condition at the society known as H-47, the first two sarees and two double ‘mundu’ are ready for sale.

KOCHI: Nearly two months after the floods dealt a blow to their lives and livelihood, the clouds are parting for the over 100 traditional households who are part of the Chendamangalam Handloom Weavers Cooperative Society. With 15 of the 99 looms back in working condition at the society known as H-47, the first two sarees and two double ‘mundu’ are ready for sale.

The price is about Rs 1,250 each for the sarees woven in a rusty brown colour with a red border, and Rs 700 for the double ‘mundu. ‘But The Kerala Platform, a facebook page providing updates on the Chendamanagalam weavers, hopes to auction the pieces at premium rates and channel the money back to the weavers. 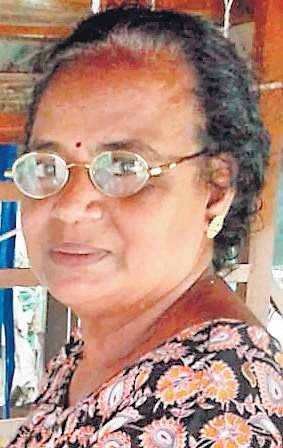 “We estimated it will cost about Rs 1 crore to get the weavers back on their feet, and want to try and do something to revive the handloom sector while there is this interest in them,” says Elsa Joy, a young Bengaluru-based data analyst, who came to Chendamangalam on hearing the stories of the flood-affected weavers and has worked among them since early September. There are five societies, overlooking around 255 looms in the area located about 30 km north of Ernakulam.

The 100 families under the H-47 society were the most affected. Apart from their homes, the dyeing units, work sheds and raw material godowns had all been submerged in the rain.

When designer Shalini James posted a heartfelt message on Facebook on September 1, the plight of the weavers became a cause celebre.

The government bought 12 lakh worth of material which were partially damaged for school uniforms, designers and others bought Rs 42 lakh. Cloth and yarn worth about Rs 20 lakh were non-retrievable. This was stock that had been readied for the Onam sales.

“The society has worked in stages since late August to help its members,” said P A Sojan, secretary of the Chendamangalam Handloom Weavers Cooperative Society. “After the stock was sold, the next step was in reaching relief supplies to households, then doing a damage assessment survey, which revealed that 17 of the 99 looms were fully damaged.”

Based on this, the society spent `2 lakh on immediate repair work. “Now the first products are ready,” said Sojan. “The society isn’t allowed to sell at anything other than the fixed rates, but we are open to The Kerala Platform doing the auction.”

Elsa and an old colleague Paul Mathew, both of whom worked on the technical backend of flood relief operations read about Chendamangalam and focussed their efforts here, setting up The Kerala Plaftform and mobilising CSR funds. That has paid off with Bajaj Electricals giving Rs 20 lakh for repairing the looms; the money arrived on October 22.

“The floods shone the limelight on the weavers and we want to build on this momentum when a lot of people will be interested to buy the product. We want to build on it to make the sector viable,” says Elsa. Jayamma Sivadasan has woven the sarees and Babu produced the mundu on his loom. Jayamma said her trademark sarees are woven in a check design, but she went for monochrome palate because that is the yarn she got.

“We ran around desperately for a month trying to get yarn,” said Jayamma, who lives in Chendamangalam with her five-member family in their house which has still not been fully restored since the flooding. “This is my husband and my only livelihood. We feel relieved that we are able to get back on our feet.”
The auction will be online on The Kerala Platform Facebook page on Saturday.

Stay up to date on all the latest Kochi news with The New Indian Express App. Download now
(Get the news that matters from New Indian Express on WhatsApp. Click this link and hit 'Click to Subscribe'. Follow the instructions after that.)
TAGS
kerala floods