Scientific approach the need of the hour: Mathew T Thomas

Water Resources Minister Mathew T Thomas on Monday said the floods have taught the state lessons on the proper utilisation of water resources.

KOCHI: Water Resources Minister Mathew T Thomas on Monday said the floods have taught the state lessons on the proper utilisation of water resources.“People shouldn’t forget the lessons the floods have taught us,” he said during the inauguration of the Ground Water Department office in Kakkanad.
“Blocking the water flow through encroachment will result in severe floods like what the state witnessed this year. The gain from illegal encroachments will be short. The general public should come forward to bring life back to rivers and water bodies where water flow has reduced drastically due to illegal encroachment.” He said flood-hit places are experiencing a severe scarcity of water post floods. The groundwater level has not improved even after the state received abundant rain. 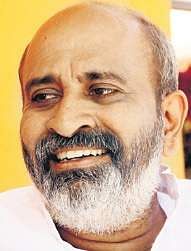 “We should adopt a scientific approach to see that rain increases the groundwater level in the state. The Ground Water Department has a crucial to play in this regard. The groundwater level, quantity, flow of water in the water bodies and the quantity of seepage should be recorded properly.“This will help greatly in countering drought in several parts of the state. The Ground Water Department and the Kerala Water Authority (KWA) will be trained to adopt a scientific method in managing water resources,” he said. The Minister said the state government expects a fund of Rs 3,000 crore to be sanctioned by the Centre as part of the third phase implementation of the National Hydrology Project.

The new office in Kakkanad was constructed as a part of the second phase implementation of the National Hydrology Project. The building will have five offices, including the Ground Water Department District Office, Regional Data Processing Centre and a water examination laboratory.

Stay up to date on all the latest Kochi news with The New Indian Express App. Download now
(Get the news that matters from New Indian Express on WhatsApp. Click this link and hit 'Click to Subscribe'. Follow the instructions after that.)
TAGS
Mathew T Thomas water resources