Santanu Dutta sits cross-legged on the carpeted floor of a hall in The Kerala Museum at Kochi on Saturday.

KOCHI: Santanu Dutta sits cross-legged on the carpeted floor of a hall in The Kerala Museum at Kochi on Saturday. In front of him is a harmonium and sheaves of paper. Behind him is a plant, placed in a glass vase, with its leaves and thin branches reaching towards the ceiling. The lights are muted, as the audience waits with a sense of expectation.Santanu says, “You will be surprised to know that, apart from India’s national anthem,  Rabindranath Tagore also wrote the national anthem of Bangladesh.” And the musician immediately moves the keys of the harmonium and sings:
‘Amar shonar Bangla
(My golden Bengal)
Ami tomay bhalobashi
(I love you)
Chirodin tomar akash
(always your sky)
Tomar batash
(your air)
Amar prane bajay bãshi.
(sets my heart in tune as if it were a flute)

Adopted in 1971 by the new country, it had been actually been written to protest the partition of Bengal on communal lines by the British in 1905.Santanu was giving a song/lecture demonstration on the songs of Tagore, which is called Rabindra Sangeet as well as the folk song genre in Bengal. But not surprisingly, Rabindra Sangeet dominated his talk. “To compose his music, Tagore took inspiration from Hindustani and Carnatic classical music, from Western tunes and the folk songs of Bengal,” says Santanu.

The literary genius of Bengal would compose songs as and when inspiration hit him. “In his lifetime, Tagore had written the lyrics and tunes of about 2000 songs,” says Santanu. “But, out of that, around 50 are really popular.”

Some like ‘Ami Chini Go Chini’, which Kishore Kumar sang for the Satyajit Ray film, ‘Charulata’ (1964), are regarded as classics. In ‘Ami Chini Go’, Ray changed the word ‘Videshini’ (woman) to ‘Bou-Thakurani’ (sister-in-law) in the last line. “That’s because, in the film, the brother-in-law was singing to his sister-in-law. And that created a lot of controversies. At that time, the copyright of the song remained with Visva Bharathi University (it expired in 2001). And I think Ray did not take the permission to change the lyrics.” Nevertheless, the change remained.

Interestingly, the Rabindra Sangeet songs were not popular during Tagore’s lifetime (he died on August 7, 1941). Instead, the big push came when the Centre celebrated Tagore’s 100th birth anniversary on May 7, 1961. “Many Rabindra Bhavans were set up in several states,” says Santanu. “There were musicians like Pankaj Kumar Mullick who propagated his music on radio and later, on TV. Soon, it became very popular.”

Asked the charms of Rabindra Sangeet, Santanu says, “The lyrics are timeless and universal.” Broadly, the songs can be placed in five categories: love, nature, worship of the Divine, nationalism, and themes like laughter and sorrow. 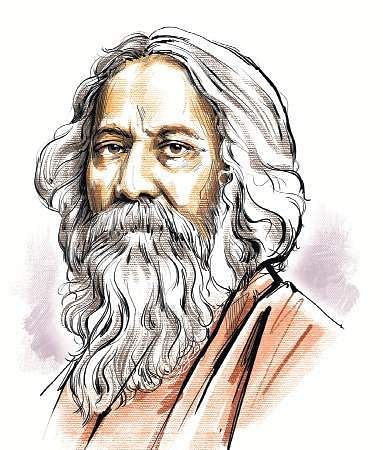 In earlier times, the songs would be accompanied by the esraj, a double-stringed instrument. Later, the harmonium began to be used, even though it is regarded as an incomplete instrument. “It does not have all the notes, especially when you move from one tune to another,” says Santanu.

But it does not matter. Whatever instrument you use or books you read, you cannot avoid Tagore in Bengal. “He was active in so many genres: painting, poems, novels, dramas, and dance dramas,” says Santanu. “He was a gigantic talent, on par with Leo Tolstoy in Russia. Like Tolstoy, Tagore had clear views on how to organise the rural economy, improve agriculture and have a new system of education.”
To fulfil his vision in education, Tagore set up the Visva Bharathi College in 1921 at Santiniketan (it became a full University in 1951). Today it is a centre for languages, the arts, music, philosophy, literature and rural management, as well as a green oasis. “There were few trees in Santiniketan many years ago,” says Santanu. “But now there are trees from all over the world.”  Apart from Rabindra Sangeet Santanu spoke about the different folk music genres in Bengal. He should know since he has done a doctorate from Burdwan University on the geographical locations of the different genres.
“In the northern part of West Bengal and Bangladesh, the Bhawaiya music is very popular,” says Santanu. “Abbas Uddin Ahmed is a famous singer of the Bhawaiya. The instrument used is a dotara (two-stringed).” In Eastern Bengal, it is the Bhatiali (boatmen songs). “The lyrics deal with love and devotion to the guru,” says Santanu.

In the western part, it is called the Jhumur. This is very popular among the tribals like the Santhals, Mundas and Lodhas. And in central Bengal, it is the songs of the Bauls. Their songs are the most popular among all the folk styles. “Purnadas Baul is the most famous Baul singer,” says Santanu. “All in all, Bengal has a rich cultural heritage when it comes to music.”